Our research integrates medicinal chemistry, neuropharmacology, computational chemistry and molecular biology not only to understand the mechanism of action of novel CNS active molecules but also to advance promising leads to preclinical studies. We focus on discovery of novel CNS drugs to explore their potential therapeutic application in several neuro-disorders like Parkinson's disease (PD), depression and drug addiction. Specifically, novel molecules which are designed through rational drug design and computational studies, are being developed routinely to target monoamine transporters and receptors systems either selectively or non-selectively to produce desired pharmacological response. In PD research area we are focused on development of bi or polyfunctional molecules to produce disease modifying neuroprotective treatment agents. In this regard, we are designing multifunctional D2/D3 and D3 preferring agonists by incorporating metal chelation and anti-oxidant properties along with inhibitory activity against alpha-synuclein protein aggregation in these molecules to address complex pathogenesis of PD including oxidative stress. Our overall goal in this project is not only to address symptomatic (relieving motor dysfunction) factor of this disease but also to produce disease modifying neuroprotective effects to slow or stop the progression of the disease. In the depression area, we have developed novel triple uptake inhibitors as promising new generation antidepressants addressing anhedonia in MDD. One of our main thrust in our research is to develop multifunctional molecules as a novel approach to CNS drug discovery and development. Our research is supported by multiple NIH R01 grants.

Pathogenesis of PD and neurodegeneration in general is complex. Growing body of literature suggest that suitable multifunctional drugs might be more effective to act as disease modifying agents than drugs that target single functional component. In this regard, our multifunctional drugs which combine dopamine D2/D3 agonist property along with other multifunctional pharmacological properties addressing complex pathogenic factors of PD. We hypothesize that such drugs will have the potential to slow or stop the disease progression while being symptomatically beneficial in alleviating motor dysfunction.

Effect of oxidative stress is strongly implicated in PD neurodegeneration. In this regard, we have been developing polyfunctional dopamine agonist molecules, which, along with their agonist activity, also should complex to metal ion like iron. Role of Iron, alpha synuclein protein aggregation and oxidative stress have been implicated strongly in the pathogenesis of PD. Ourmultifunctional properties include antioxidant activity, iron chelation activity, Increase of cellular GSH/ catalase level, increase of UPS level and inhibition of alpha-synuclein protein aggregation.

We have developed a novel molecular template based on a hybrid drug development approach. Further SAR studies led to the development of a series of agonist molecules from this novel template. Recently, we published a paper demonstrating neuroprotective property of lead multifunctional potent D2/D3 agonists (J. Neurosci. Res. 88: 2513–2523,  2010, ACS Chem. Neurosci. 4 (10), pp 1382–1392, 2013, J. Neurochemistry, Volume 131, Issue 1, 74–85, 2014, Neurotoxicity Research, 4, 302-18, 2015).  In parallel, we have been designing multifunctional D2/D3 and D3 preferring agonists by incorporating metal chelation and anti-oxidant properties along with inhibitory activity against alpha-synuclein protein aggregation in these molecules to address complex pathogenesis of PD including oxidative stress. We have recently published articles on iron binding D2/D3 agonists to demonstrate validity of our proof of concept (J. Med. Chem. 53, 2114–2125, 2010; ChemMedChem. 6, 991-5, 2011). We have also recently published an article based on our proof of concept preliminary data from a lead multifunctional D2/D3 agonists with property to modulate aggregation of alpha synuclein protein (ACS Chem. Neurosci,ACS Chem. Neurosci., 2014, 5 (8), pp 700–717). 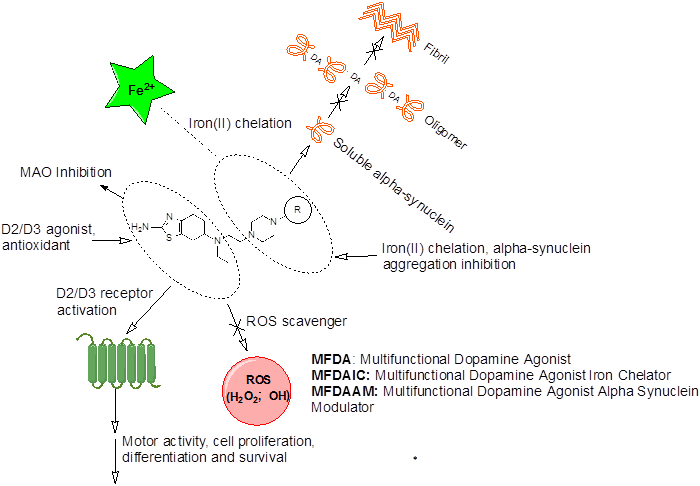 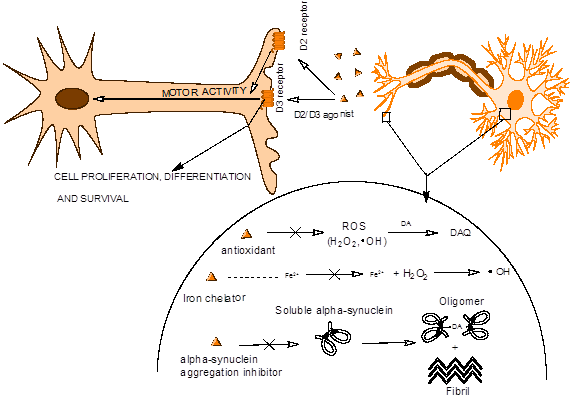 This research is funded by NINDS.

Recent Selected Publications in this project:

TRIPLE UPTAKE INHIBTOR AS NOVEL MODULATORS OF DEPRESSION AND PAIN

In this project, we have been developing via asymmetric synthesis process, novel asymmetric unique pyran templates as blockers for serotonin (SERT), norepinephrine (NET) and dopamine (DAT) transporters. Our initial work on development of asymmetric di- and tri-substituted pyran derivatives identified potent triple uptake inhibitors (TRI) as blocker of SERT, DAT and NET as well as selective dopamine-norepinephrine reuptake inhibitors (DNRI). Asymmetric synthesis methods have been developed by us to generate these novel molecules. Our central hypothesis in this project is to evaluate whether the inclusion of additional dopaminergic activity in these TUI will enhance their antidepressant activity as dopamine has been strongly linked to major depressive disorder (MDD). Some of our selected publications in this area are J. Med. Chem. 48, 4962-4971, 2005; EJP, 589, 73–79, 2008; EJP, 671, 39–44, 2011; ChemMedChem, 7(12):2093-100, 2012; Bioorganic & Medicinal Chemistry 22 (2014) 311–324). In one of our recent publications, we have demonstrated development of an orally active TRI (Plos One, 2014, 9, e113420). One of our important goals will be to study whether such novel TRI molecules can address anhedonia, a major unmet need in the current treatment of MDD, which accounts for their inefficacy. Thus, TRI can potentially serve as a new generation antidepressants by producing more desirable therapeutic profiles compared to the current existing drugs. Our drug discovery effort in this project integrates studies, which include chemistry, in vitro and in vivo pharmacology, Positron Emission Tomography (PET) imaging and new generation animal depression models. I have been funded by a R01 (NIH/NIMH) grant based on this project. We are currently working on towards a competing renewal of our grant. 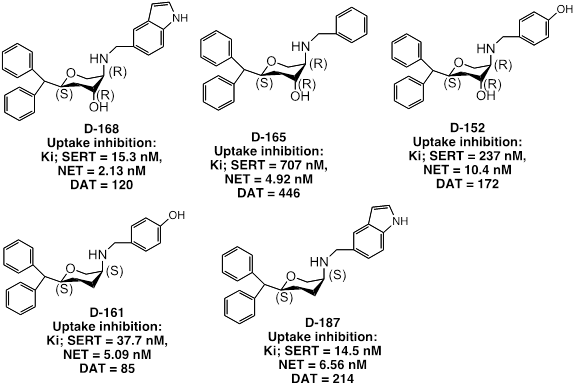 One of our goals will be to study whether such novel molecules can produce more desirable therapeutic profiles as antidepressant agents compared to the current existing drugs and whether their chronic exposure lead to the production of neurotrophic factors e.g. BDNF, in the CNS via gene expression. This project is funded by an NIMH grant.

Recent Publication on this Project:

In this project, we are investigating rational design, synthesis and biological evaluation of potent and selective small molecules for their binding to the biogenic amines neurotransporter systems, specifically for the dopamine transporter (DAT) system. The DAT is a putative presynaptically located 12-transmembrane domain protein, which translocates extracellular dopamine into the nerve endings of DA neurons. The DAT is an important constituent of brain pathways that contribute to movement and behavioral reward. Analysis of these designed molecules in various in vitro binding assays is being carried out routinely to understand their mode of binding with the transporter molecules and to build Structure-Activity Relationship studies. One of our goals is to explore the potential use of these compounds as medicating agents for the treatment of cocaine and methamphetamine addiction and other neurological disorders. We are also engaged in developing of Single Photo Electron Computer Tomography (SPECT) and Positron Emission Tomography (PET) agents for imaging studies in the CNS, along with development of affinity and photo-affinity ligands as molecular probes to characterize the binding interaction with the receptors further at a molecular level to understand their functional properties. In this context, we are pursuing site directed mutagenesis study with the dopamine transporter mutants to discover point of interactions on the DAT molecule with our selective and potent ligands.

We already have generated a novel series of compounds, which were found to be very selective for the dopamine transporter system from in vitro studies and exhibited interesting in vivo activity. Currently, we are in the process of evaluating a selected DAT selective molecule in primate studies to evaluate its potential to modulate cocaine effect. This study was funded by NIH/NIDA.

Aloke K. Dutta. Synthesis and biological characterization of (3R,4R)-4-(2-(benzhydryloxy)ethyl)-1-((R)-2-hydroxy-2-phenylethyl)-piperidin-3-ol and its stereoisomers for monoamine transporters. ChemMedChem, 1075-85, 2009.