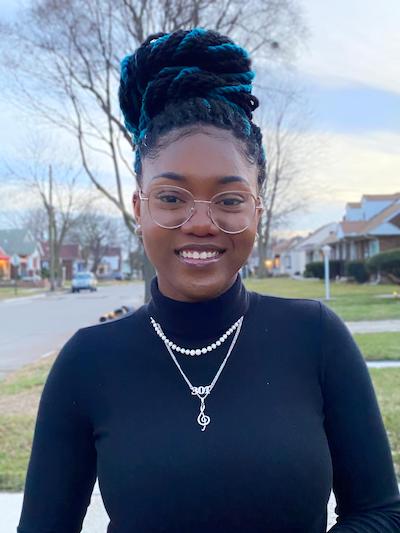 Tiara Hinton always wanted to be a doctor. This year, that dream will come true — but not in the way she had imagined while growing up in Maryland. When she walks across the Wayne State University commencement stage this December to become Dr. Tiara Hinton, she will have earned her doctor of philosophy from the Eugene Applebaum College of Pharmacy and Health Sciences Department of Pharmaceutical Sciences, with a concentration in medicinal chemistry.

“Being a doctor was my lifelong goal from the time I was 6 years old until my junior year of undergrad,” said Hinton, who earned a bachelor’s in chemistry from Morgan State University in Baltimore. “Everyone around me knew that I didn’t want to go to med school, but I had to figure that out on my own. My parents bought me toy doctor kits and anatomy books through the years, and I went to undergrad with that mindset.”

Even though Hinton was pre-med, one of her professors recommended her for an introductory graduate research program at Carnegie Mellon University. Despite initial skepticism, she ended up really enjoying the experience, saying, “I learned so many new things, and it helped me understand what I wanted to do in the future.”

Hinton's choice of graduate school over medical school was solidified when she applied to the NIH Research Training Initiative for Student Enhancement program during her junior year. As an undergraduate RISE scholar, she worked on anticancer agent research under the mentorship of Morgan State’s Dr. Santosh Mandal, presented her findings at 19 local and national conferences, and published a paper.

“I’ve been curious my entire life. I’m always asking questions, and taking things apart so I can put them back together again,” Hinton said. “When I was sick as a kid and took Tylenol, I wanted to know how it worked — how did the medicine I put in my mouth know I had a headache?”

Questions like this sparked in her a yearning to cure diseases that had previously been deemed incurable. “That’s why I initially wanted to go to med school,” Hinton said. “I thought doctors were the ones doing the curing. Now I know that what I really want to do is cure the incurable through pharmaceutical science research and discovery.”

When it came time for Hinton's next academic step, her older sister Tylar was also looking at grad school, with plans to pursue a master of fine arts in costume design. Hinton’s father suggested they both consider Wayne State, as he had grown up in Southwest Detroit and they still had family in the area. Hinton began the WSU Graduate School application process, uploading her résumé, one of several documents required. That was all it took to get the attention of Professor of Pharmaceutical Sciences Timothy Stemmler.

“I got an email from Dr. Stemmler saying, ‘I want you to come work for me,’” Hinton recalled. “He told me about the research being done in the Stemmler Lab, and what people who’d worked there had gone on to do, and said I’d be a good fit.”

They exchanged a few emails and chatted on the phone, and Stemmler offered Hinton a position before she’d even had a chance to finish her application. When all was said and done, Hinton not only was admitted to WSU, she earned the Graduate School's prestigious Dean's Diversity Fellowship.

“Tiara is an outstanding member of our research program,” said Stemmler, whose lab focuses on expanding the understanding of iron regulation events in the body. Iron is crucial to the human central nervous system and related to neurodegenerative disorders such as Alzheimer’s and Parkinson’s. “She is creative, insightful and a real leader both in our research lab and in the many activities and committees she volunteers with at the university.”

Having only visited Detroit on holidays, Hinton and her sister — who also was accepted into her WSU graduate program — were excited to explore the city where their father had grown up and get better acquainted with their paternal grandmother. When Hinton arrived in Midtown, the new Warrior was surprised by the city’s cold weather, the high level of parallel parking skills it required and the intensity of graduate school versus undergrad.

“I struggled my first year. This journey takes a higher level of dedication,” Hinton said. “The small bumps in the road I encountered have only encouraged me to dig a little deeper and push myself to reach my goals. These were not the only obstacles I have faced, and I know they will not be the last — it’s not always about how you start but how you finish.”

It’s that perspective that Hinton brings to her position as a Graduate Ambassador, which connects current WSU grad students with prospective Warriors to answer questions and represent the university.

“Tiara has been an anchor for the WSU Grad Ambassador team,” said Graduate Programs Outreach Specialist Shantelle Cavin. “Her dedication and willingness to share her experience authentically have been tremendously helpful to many prospective students.”

Hinton says she has gained a lot from the experience as well. “Having a sense of community is important, and that is what I have found in the Graduate Ambassador program,” Hinton said. “I genuinely enjoy meeting new people and sharing my academic journey.”

She gets a similar sense of fulfillment from her work with WSU's Success for Underrepresented Students in Graduate Education (SURGE) program. As a SURGE Scholar, Hinton participants in one-on-one mentoring and other support activities. "SURGE is an opportunity for me to mentor and see things from a different perspective," she said.

Late last year, Hinton published her first first-author paper, the review article “Molecular characteristics of proteins within the mitochondrial Fe-S cluster assembly complex.” When she shared the news on her LinkedIn page, longtime WSU Applebaum Pharmaceutical Sciences Professor George Corcoran called her one of the department’s finest PhD candidates ever, and added, “I am in deep admiration.”

A world of opportunity

During her first year at Morgan State, Hinton played the piccolo in the university’s marching band and the flute in symphonic band. By sophomore year, she was laser focused on research but missing her creative side. One night, a friend convinced Hinton to tag along for a student org painting event. “I had so much fun that I didn’t look at my phone once,” Hinton said. “And I was very pleased with my painting! So I bought a sketch book, a few canvases and some cheap paints from Walmart, and made things for friends. Their reaction showed me I could do something I didn’t think I was capable of.”

At the beginning of the pandemic, she started an online business to sell her art. “Being a grad student and working in the lab makes it hard to carve out time for art, but painting helps me recharge,” Hinton said. “I don’t have to focus on anything except for what’s directly in front of me, like what color do I want to use next? And the answer is up to interpretation — it’s not specific like science. It’s whatever I want it to be!”

Hinton still hears the voice of her elementary school principal saying she could do anything she set her mind to if she put in the work. “Even now, I’m a chemist in a lab that’s focused on biochemistry and biophysics. I’m not a biologist, not a physicist, not a biochemist — I didn’t even know what all of that encompassed when I decided to come to Wayne State. But by the end of my program, I’ll be able to say that I’m all those things as well as a chemist.” 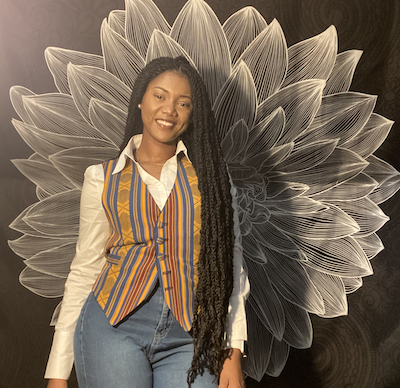 In that spirit, Hinton said she refuses to pigeonhole herself as she considers what’s next. “Getting a PhD in pharmaceutical sciences will prepare me for so much — teaching at the college level, an industry career at a pharmaceutical company, a patent agent position at a law firm — it feels like my options are endless,” she said. “I believe in myself and in giving myself time to figure it out. But my hope is that by 2030, I’ll be a faculty member at a university where I have my own lab. I want to provide the same sort of research opportunities to students that were offered to me.”

Stemmler is pleased his protégé is considering following in his footsteps. “Whatever Tiara does with her degree, she will be an amazing mentor for young individuals interested in learning and science,” Stemmler said. “We are lucky she chose to come to Wayne State.”

Pharmaceutical Sciences is a multidisciplinary department providing expertise in the areas of drug discovery, development and evaluation. They are dedicated to pursuing scholarship that creates new knowledge, learning that disseminates and preserves knowledge, and engagement that exchanges knowledge. Learn more about the department and its application process.