Each December 1, people across the globe join in solidarity on World AIDS Day to highlight the work done to eliminate the HIV/AIDS epidemic. The day is also observed to extend support to those who are living with the life-threatening condition caused by the human immunodeficiency virus, or HIV. The virus attacks the immune system and reduces its resistance to other diseases, putting the lives of the patients at risk.

World AIDS Day was first observed in 1988, however HIV remains a major public health issue that affects millions of people around the globe. According to the World Health Organization, there are more than 37,700,000 people currently estimated to be living with HIV.

Though the world has made significant progress since the virus was discovered in 1984, important targets for the past year were not met, reports the WHO. “Division, disparity and disregard” for human rights are some of the major failures that allowed HIV to become and remain a global health crisis, and the situation has been exacerbated by COVID-19, making the lives of many people living with HIV more challenging.

A red ribbon has grown to become a symbol of HIV/AIDS awareness and World AIDS Day. Student organizations at Wayne State’s Eugene Applebaum College of Pharmacy and Health Sciences have collaborated to remember the red ribbon and remind people that the HIV virus is very much prevalent among us. “End inequalities. End AIDS” is the theme of World AIDS Day 2021.

“Today my fraternity brothers and I are passing out red ribbons around campus in honor of World AIDS Day,” said Jad Kawas, Kappa Psi’s chairman for philanthropy. “This day is important in the fight against HIV/AIDS, as it reminds that there is still a vital need to raise awareness and money, fight prejudices and educate people about how we as a global community can work together to stop the transmission of the virus.”

Leading up to today’s observance, Fighting AIDS with Nutrition (FAWN) and the Student National Pharmaceutical Association have been working hard to educate the community. Students from both organizations have been present at community events, handing out free condoms and educational materials to help control the spread of the virus. FAWN also held an educational webinar led by Dr. Frankie Julian on the importance of nutrition in treating patients living with HIV/AIDS.

“FAWN continues to provide liquid nutrition to patients living with HIV/AIDS in countries all over the world. From Africa, South America and Asia, our organization has collected, packed, and shipped thousands of units of liquid nutrition through our partnership with World Medical Relief,” said FAWN President Ali Khanafer. “As future pharmacists, it is our responsibility to know how to provide the best treatment for HIV patients. To prepare for World AIDS Day, our organization wanted this online seminar to highlight the importance of proper nutrition in maximizing the benefits of antiretroviral therapy. FAWN is grateful to Dr. Julian for sharing his expertise with our students and supporting our mission.”

FAWN member Victoria Espinosa added, “World AIDS Day is about educating others and supporting those affected by the virus. HIV has been stigmatized with fear and misinformation. We need to encourage each other to talk openly about it. HIV patients may feel shame despair and isolation. They may pull away further and try to deal with all the problems themselves, but the truth is that we need each other. Global leaders and citizens need to rally to confront the inequalities that drive AIDS and reach people who are currently not receiving essential HIV services.” 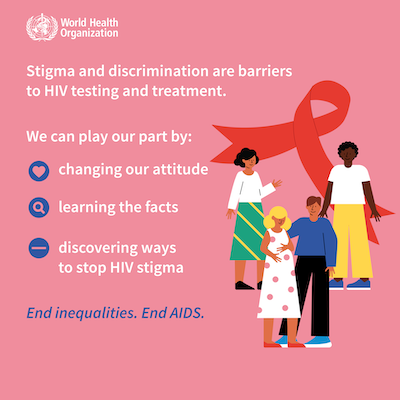 WSU’s chapter of the American Pharmacist Association Academy of Student Pharmacists is helping spread awareness online via a digital campaign, and members of the Student National Pharmaceutical Association have worked to raise funds to support local health initiatives for patients in Detroit living with HIV.

“Although transmission rates have been decreasing over the past decade, there are still many disparities to consider when it comes to HIV,” said SNPhA President-Elect Obioma Opara. “People of color are disproportionately affected by the HIV epidemic, with metro Detroit having the highest prevalence rates in Michigan. SNPhA is committed to initiatives that improve the health, education and social environment of minority communities with respect to HIV/AIDS awareness, education and prevention.”

SNPhA President and APhA Vice President for International Affairs Joseph Paul Javier added, “As we remember the red ribbon today and every day, we want our community to know there are local resources available to protect people and help stop the spread of HIV. It’s important for people to get tested regularly and know their status. There are clinics in the city where one can get tested, confidentially and at no cost. There are medicines like PrEP and PEP that can protect you from contracting the virus. And for those living with HIV, the drug therapies available today are powerful and effective.

"As clinicians, we want to see patients reduce their viral loads to undetectable status. When a person living with HIV is actively taking HIV drugs and their viral load stays at undetectable levels, they cannot transmit HIV to a sexual partner who is HIV-negative. Through education and awareness, we can build hope and end the HIV stigma.”