Mind, heart and soul: Doctor of Pharmacy student Joseph Paul Javier gives everything his all 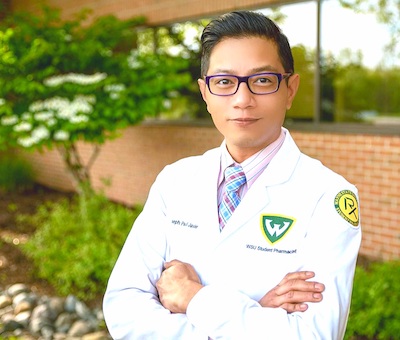 On his deathbed, Javier swore that if he somehow managed to survive, he would spend the rest of his life doing as much as he could to help keep others alive as well.

People who aren’t familiar with this story are astounded by everything Javier manages to accomplish in any given day — on top of making his way through Wayne State’s rigorous Doctor of Pharmacy program in the Eugene Applebaum College of Pharmacy and Health Sciences. His email signature block lists no fewer than 15 affiliations and leadership positions below his name. Among them, he is:

A connecting thread through all of these commitments is the Kappa Psi pharmaceutical fraternity. In addition to serving as historian of Wayne State’s Mu Omicron Pi chapter and sitting on the fraternity’s Great Lakes Province executive board, Javier is the chapter’s unofficial ringleader, organizing and motivating his brothers to participate in a range of philanthropical efforts. “Joining Kappa Psi was one of the best decisions of my life,” Javier said. “A fraternity is all about lifting each other up — you can accomplish so much with a team of brothers at your side.”

Despite being nearly twice the age of most of his fraternity brothers, Javier brings youthful enthusiasm to an industrious brotherhood. In addition to promoting childhood literacy through the national Reach Out and Read philanthropy campaign, helping staff health care clinics and volunteering with Detroit nonprofits, Kappa Psi has for the past two years participated in the national Up to Us competition, which raises awareness about the U.S. national debt and its impact on future generations. Since arriving on campus, Javier has served as the team’s executive director, leading them to sixth place and an award for most creative campaign.

“Joseph has been a vocal leader and organizer from the beginning,” said Pharmaceutical Sciences Assistant Clinical Professor Philip Pokorski, Kappa Psi’s faculty advisor. “Many of the brothers are active in community and university events, but Joseph elevates both his and the chapter’s involvement to a totally different level with his infective enthusiasm and commitment to the fraternity, Wayne State and the Detroit community. Joseph is mega-active in so many different aspects of giving back to the community and has represented Kappa Psi at the highest level.”

And Javier isn’t just busy. He’s good. His superpower is organizing and motivating others, and his finely honed leadership skills are due in part to the fact that he is a second-career student. After beginning college at age 16 — he studied at Harvard for a semester but chose to major in biology as a Presidential Scholar at Wayne State — he veered onto another path.

“I was doing math and science before I could walk,” Javier laughed. “Then when I got to college I was rebellious and didn’t go to class.”

Looking for a fresh start, he left WSU and moved to the Philippines to live with an aunt and study integrated marketing communications at the University of Asia and the Pacific. During a night of karaoke with his cousins, Javier was discovered by a talent manager, which ultimately led to a 15-year career in radio, TV, PR and journalism.

“I was a columnist for the Manila Bulletin, editor for The Manila Times and taught students at the Manila Times School of Journalism. I ran my own PR and events management company while I worked as a broadcaster on a top radio show, which was syndicated across the Philippines and around the world. Our program was eventually developed for television and my co-hosts and I would fly to different locales in the Philippines, China, Singapore and Korea to film. It was all so surreal,” he said. “My life seemed picture-perfect. But then I got sick and almost died.”

He finally had the biology degree he had started in his teens and was fueled by his deathbed promise to make a difference. Javier considered applying to medical school but his uncle — Dr. Pedro Saavedra, who earned a pharmacy degree from Wayne State in 1980 — suggested that the PharmD program would be a quicker path to a health care career.

Javier says he broke down in tears during his WSU Applebaum admissions interview: “My life has never gone in a straight line. I’m really thankful it’s led me to Wayne State.”

This month, Javier is participating in the Up to Us Mentorship Summit, which offers the top 20 teams in this year’s competition the opportunity to glean industry advice from Up to Us alumni and the Clinton Global Initiative University. He is serving as the event’s Political Science and Public Policy moderator, joining other innovators to discuss their experience advocating for legislation that supports sustainable economic growth and equitable health outcomes for all Americans.

Being part of the Up to Us alumni community has led to numerous opportunities, including a scholarship to Harvard Business School. Along with Kappa Psi brothers Hussein Safaoui and Noah Trotter, Javier completed online courses and now holds Harvard certificates in business analytics and sustainable business strategy — coming full circle after studying at the Ivy League university in the ’90s. Just last week, Javier was awarded another Harvard scholarship, this time for a certificate in global business.

He thinks he may put those business lessons to use by opening a pharmacy one day. “I love having my finger on the pulse of my community, and I’d like to have patients who become familiar faces,” he said, adding that one of the reasons he is involved in so many organizations is to try on different hats for the best fit. “I want a job where I’ll have the biggest impact — maybe with a government agency like the FDA or CDC.”

Javier recently served as a legislative intern for Michigan House Rep. Padma Kuppa, who added him to her team after she was appointed to the state’s Prescription Drug Task Force. “I sat in on task force meetings, worked with pharmacists to provide better access to lifesaving medications and helped Rep. Kuppa respond to constituents who contacted her about medical or science issues,” he said. “Because one of my skill sets is networking and mobilizing people, working in policy might be the best way to make a difference by giving more Americans access to health care and medications that would improve their quality of life — or save lives.”

Professor of Pharmacy Practice Mary Beth O’Connell, who has worked with Javier on community research projects, is confident he’ll have a positive effect on others no matter which path he takes. “Joseph combines his life experience with his passion for all people to have good and healthy lives, and leads and acts from his mind, heart and soul,” O’Connell said. “He is an amazing student pharmacist who understands the importance of advocacy, community engagement, pharmacy services and research. His positivity, respect and team spirit make him an essential partner.”

Javier is grateful for the support. “Most people get one chance at life, but I feel like I’m on my second or third chance,” he said. “I believe we are sometimes given hardships so we can better identify the struggles of others. I’ve had a lot of blessings but also a lot of adversity, and that has allowed me to see what others may not. Now I am driven by the feeling that I need to do as much as I can because life is fleeting. When the time finally comes and I find myself on that deathbed again but close my eyes for the last time, I want to be able to look back at my life and not be disheartened. I want to say with full confidence that I used this borrowed time to honor my parents and please my God happily in the service of others.”

WSU Applebaum information meetings for prospective students take place at 6 p.m. on the first Tuesday of each month. The application process for the Doctor of Pharmacy program begins in July.