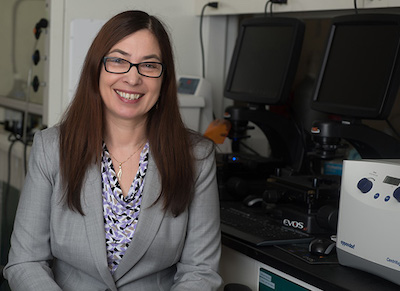 Throughout her 20 years as a neuroscience researcher, Dr. Moszczynska has engaged primarily in the study of neurotoxicity and neurodegeneration in the central nervous system. Much of her research has focused on the neurotoxic effects of the psychostimulant methamphetamine, more recently expanding to identifying the molecular mechanisms mediating methamphetamine use disorder.

Dr. Moszczynska joined the Michigan Chapter of the Society for Neuroscience when she started her independent research in the WSU Eugene Applebaum College of Pharmacy and Health Sciences Pharmaceutical Sciences program in 2010, and became a council member in 2018.

“It has been an exciting time to be involved in neuroscience and I feel honored to be the president-elect of the Michigan Chapter,” Dr. Moszczynska said. “I am looking forward to continuing to work with, and lead, this amazing group of accomplished neuroscientists from Michigan universities to carry forward our mission of advancing neuroscience through research and community outreach events such as Brain Bee events and Brain Day.”