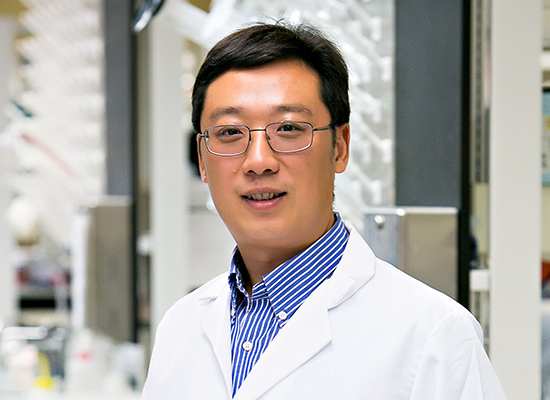 RESEARCH OPPORTUNITIES ARE AVAILABLE FOR STUDENTS AND TRAINEES WHO ARE INTERESTED IN OMICS-BASED RESEARCH FOR HUMAN METABOLIC DISEASE OR CANCER, AS WELL AS FOR PHARMACOGENOMICS AND PERSONALIZED MEDICINE.

Research in the Liu lab is concentrated on genetics and genomics of human liver disease and cancer, as well as pharmacogenomics and precision medicine. Current ongoing research in the lab include the following:
1) Genomics of nonalcoholic fatty liver disease (NAFLD) and nonalcoholic steatohepatitis (NASH). We use omics-based approach to identify critical genes, microRNAs, metabolites and their underlying pathways involved in NAFLD and NASH. The identified critical molecules and pathways are further taken into a mechanistic research pipeline using both in vitro and in vivo models to characterize the detailed mechanism. Over the past few years, we have identified a few important genes involved in the genetic susceptibility to NAFLD and NASH. In addition, we recently identified a number of microRNAs and lipids that are highly associated with NAFLD and NASH. We now have ongoing research to understand how these newly identified miRNAs and lipids mediate the development of NAFLD and NASH.
2) Precision medicine and personalized nutrition. We are interested in translational research to test hypotheses whether genotype-based patient treatment or nutritional therapy would lead to a more effective treatment or prevention for NAFLD and other disorders. Many DNA variants have been associated with inter-individual differences in nutrient metabolism and response, e.g. lipids which are further integral to NAFLD/NASH and other human disorders. We are currently utilizing in vitro and in vivo models to test the genotypic response to omega-3 lipids. We are also developing collaboration to test the same hypothesis in human population esp. by focusing on population disparities. In addition, we now are also developing siRNA and miRNA-based therapeutic for NAFLD and NASH as well.
3) Pharmacogenomics and pediatric liver drug metabolism. The genetic variation underlying the hepatic function of drug metabolism and transporting remains incompletely understood. Besides the genetic variation, there are also complex regulatory mechanism for pharmacogenes in the liver at the molecular level, e.g., regulation by miRNAs; as well as other context variability in human populations, e.g., age and gender. Our laboratory is dedicated to the use of various omics-based approaches and systems strategies to delineate both genetic and non-genetic factors in determining pharmacogene expression and activity in human livers, and to identify molecular markers that are able to guide personalized medication in both adults and children.
4) Cancer genetics and precision medicine. We are interested in the genetic interaction between germline variants and somatic mutations in human cancers. We hypothesize that germline variants provides environment as “soil” that is necessary to the “growth” of somatic mutations as “seeds”. We have in part corroborated this hypothesis by focusing on the EGFR mutations in lung cancer (Wei et al, CCR, 2015). We are now working on a stem-cell based approach combining with genome-wide assessment to further test this hypothesis. In addition, we also interested in identifying biomarker and molecular mechanism that can lead to safer and more effective treatment for cancers.