A native of Lebanon, Professor of Pharmacy Practice Dr. Linda Jaber returned to her home country this summer as a participant and presenter at the National Arab American Medical Association (NAAMA) Summer International Conference, held June 30-July 5, 2019, at the American University of Beirut (AUB). The conference marked her first presentation at the AUB campus.

Jaber is an authority on diabetes within the Arab American population. In her AUB conference presentation, “A Team-Based Approach to Diabetes Research in Arab Americans,” she was able to demonstrate the relevance of team science, a strategy that brings together experts from diverse disciplines to collaborate on a complex issue, in advancing her research program.

“Most of the current problems in health science are way too complex and multi-faceted for single scientist or discipline to resolve. A diverse research team can make greater strides toward solutions of these complex problems when various layers of expertise and perspectives are synthesized,” Jaber said.

One of 30 speakers from the U.S., Lebanon and Canada, most of whom were clinical physicians, Jaber presented unique insights on research methodology.

“By definition, the science of team science is an emerging field of research aimed at understanding the processes by which scientific teams organize, communicate and conduct research,” Jaber said. “By learning what makes research teams more effective, we can begin creating such teams more equipped to mitigate the enormously complex social, environmental and public health problems emerging today.”

Using her own work on diabetes – a complex condition – as an example, Jaber demonstrated the value of team science in advancing research. A clinical pharmacy scientist herself, she has tapped into scholars in epidemiology, psychology, sociology, statistics, implementation and public health sciences to both deepen and amplify her community-based studies.

“It’s no longer sufficient to simply discover things,” Jaber said. “Researchers from multiple fields now must work together to improve the health of the global population and truly impact lives. This is the only way we can be successful.”

Inspired by the conference experience and the beauty and complexity of the country itself, she has begun to strategize a long-term project in Lebanon.

“Most of the Arab American population in the Detroit metro area is Lebanese origin,” Jaber said. “I have previously demonstrated the high prevalence of diabetes among Arab Americans. Similarly, about 15% of the Lebanese population has diabetes. A natural extension of my research is to bring my work into Lebanon itself.”

Her project will focus on building and implementing a national diabetes prevention curriculum similar to efforts in the U.S., where there are large-scale campaigns to educate people on lifestyle changes and behaviors that can reduce diabetes risk.

“I am not aware of any formal diabetes prevention initiative in Lebanon, and my plan is to translate the American diabetes prevention model into the different social, religious and dietary aspects of Lebanese culture,” Jaber said. “I have never been more determined to pursue my research work on an international scale as I am today. My goal is to impact the lives of people in my home country.”

Participants in the NAAMA conference also had the opportunity to meet with non-governmental agencies that provide health services to refugees in Lebanon. While historically Lebanon has been home to predominantly Palestinian refugees, today most entering the country are fleeing Syria.

“This was an eye-opening experience,” said Jaber, whose research work may have an impact on the heavily displaced population of the MENA (Middle East and North Africa) region, an exponentially expanding group facing increasing humanitarian crises. The UNCHR reports that 51% of all refugees worldwide are currently from MENA region.

Committed to this global crisis, the Eugene Applebaum College of Pharmacy and Health Sciences is sponsoring a conference on Syrian refugee health Oct. 13-18 at Gaziantep University, located in the city of Gaziantep in Turkey where – according to conference organizers – roughly 21% of the population consists of Syrian refugees. In 2016, the UN Identified 13.5 million Syrians requiring humanitarian help, of which 6 million are internally displaced and 5.5 million are refugees outside Syria.

At the upcoming conference, Jaber and fellow WSU Applebaum Professor of Pharmacy Practice Paul Kilgore will participate in a panel discussion on technologies to improve refugee health.

In Beirut, Jaber met with Dr. Iman Nuwayhid, professor and dean of the faculty of health sciences at the AUB, to initiate discussions on future collaboration between Wayne State University and the Lebanese institution.

Last fall, the Eugene Applebaum College of Pharmacy and Health Sciences hosted Dr. Imad Btaiche, professor and dean of the Lebanese American University (LAU) School of Pharmacy, to deepen the partnership among the two universities. Wayne State and LAU established student and faculty exchange programs in 2017.

“Faculty involvement in international collaboration efforts like these is consistent with the university’s strategic plan, which places a high priority on global outreach,” Jaber said. “I am proud to be part of extending Wayne State’s impact into Lebanon.” 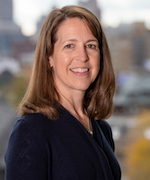