This is not the life Kimberly Hurst saw for herself when she graduated from Wayne State University’s Eugene Applebaum College of Pharmacy and Health Sciences with a master’s from the Physician Assistant Studies program in 2001. She never could have imagined building a sexual assault nonprofit from the ground up and introducing herself as an executive director — let alone being named a 2020 Health Care Hero by Crain’s Detroit Business. But she wakes up every day knowing this is the life she was meant to live.

“I went to school to be a PA, not run a nonprofit,” Hurst said. “But I saw a critical need, and the past 15 years have been an honor and a privilege.”

Hurst does in fact work as a PA — twice a week in the Beaumont ER — but the job that fills her with passion and purpose is running Detroit’s only nonprofit provider of sexual assault exams. She founded the program in 2006 after she went to work in a busy Detroit ER upon graduating from WSU and saw firsthand how urgently the city needed specialized sexual assault care. Once she was determined to fill that need, she set about teaching herself how to build a nonprofit from the ground up.

Now she’s taking the next step, and it’s a big one. At the beginning of December, Hurst announced that the program formerly known as WC SAFE (Wayne County Sexual Assault Forensic Examiner’s program) would be changing its name to Avalon. With the fresh branding comes plans for a new healing center in Detroit that will offer expanded services to the community — services not currently being provided by one organization under one roof.

“We have grown into so much more than just a sexual assault forensic examiner’s program and our services extend beyond Wayne County,” Hurst explained. “After starting as one clinic site in the middle of Detroit providing limited services to about 150 patients annually, we’ve grown to six clinic sites and have now provided comprehensive, empowerment-focused services to nearly 17,000 people who’ve experienced sexual violence at any point in their lifetime.”

Hurst said she wanted a brand that would “carry us through this journey with strength, resiliency and bravery, just like those individuals we serve,” adding, “Our mission hasn’t changed: We want to be seen as a beacon of hope for those who have experienced the trauma and hurt of sexual violence.”

Avalon will continue to provide free and confidential acute medical-forensic exams, crisis intervention and trauma-informed support, but also everything survivors need after an assault — from legal advocacy and financial coaching to group therapy and yoga classes. “Currently, we have strong community partners that we refer people to after we’ve conducted a forensics evaluation, but we have to send them away from our clinic to obtain those services. Now we will expand our compassionate and trauma-informed care to include a range of healing resources in one spot.”

Hurst and her team are planning a major launch during Sexual Assault Awareness Month in April 2021, when they will begin raising funds for the Avalon Healing Center. The group aims to renovate an existing Detroit property to honor the city’s history while working with a trauma-informed interior designer to create a welcoming space for survivors. This means high ceilings, warm colors and plenty of life-affirming vegetation, with an intentional absence of anything that could trigger or traumatize survivors, such as dark hallways and bleak stairwells.

Donors will be invited to sponsor rooms so their names are paired with healing care, and the center will eventually include areas that foster a sense of community, such as retail space showcasing partner vendors like Rebel Nell and a café offering baked goods from — where else? — Avalon International Breads. Incidentally, the nonprofit is already promoting Rebel Nell handcrafted jewelry as a fundraiser, and currently has no ties to the popular Detroit bakery besides having the same great taste in names. 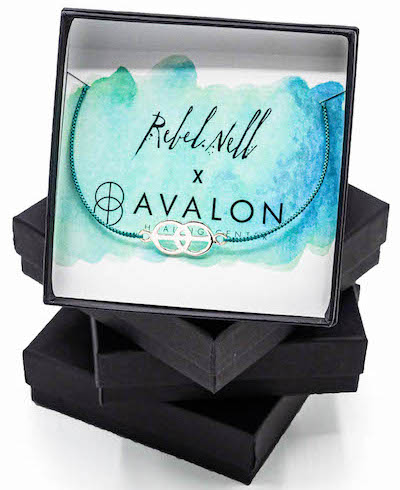 The Avalon Healing Center is intended to be a pilot program. Ultimately, the nonprofit plans to open centers in additional cities, states and countries to fill a dire need. “Each time Kimberly and our organization appear in the news for the compassionate and trauma-informed care we provide to survivors, I’m contacted by people from across the country and around the world asking how they can replicate the good we’re doing,” said Avalon Fund Development Director Trinea Gonczar. “We know that our model works, and we know that survivor care like this is lacking in so many of the world’s major cities.”

Gonczar herself first learned of the work Hurst was doing for sexual assault survivors during the trial that charged former Michigan State and USA Gymnastics team physician Larry Nassar with multiple counts of sexual assault. Gonczar was among the 156 women and girls who delivered powerful victim-impact statements during his sentencing in January 2018. Nassar is now serving up to 125 years in federal prison.

“During the sentencing period, another survivor — a 15-year-old girl — attempted suicide and was put in a trauma ward, which can be extremely triggering for anyone, let alone a 15-year-old sexual assault survivor,” Gonczar said. “I kept thinking: ‘We’re on this massive stage; how is it that we have no support? You’d think we’d be offered resources.”

When none were forthcoming, Gonczar went out in search of them herself, saying, “I was looking for ways to help that girl, and everyone kept telling me, ‘You need to talk to Kimberly Hurst.’”

Gonczar found WC SAFE on Facebook, messaged Hurst, and ended up sitting across from her for two hours talking about options that could help her fellow survivors. Afterwards, she couldn’t stop thinking about all the others who were suffering silently: “I realized I could use my very public story to shine a light on the work Kim was doing.”

She called Hurst to volunteer, but WC SAFE happened to have an open development position that would make perfect use of Gonczar’s background in fundraising, journalism and personal experience. Now she trumpets Avalon’s message with passion, saying, “This is my forever job, and finding my way here — being able to stand up for other survivors — is my silver lining.”

In addition to feeling gratified by making a difference for a living, Gonczar is proud to work for someone like Hurst. “She truly is a superwoman,” Gonczar said. “She’s helping survivors at Avalon while working as a PA at Beaumont during a pandemic and raising two boys. She is kind and mindful, and also so humble.”

The rebranding caps off a headline-making year for Hurst, whose Health Care Hero award this spring was just the start. She also was one of two recipients of the 2020 Kathy J. Pedersen Grant to Promote Equitable Care, was among the Esteemed Women of Michigan honored by the Gary Burnstein Community Health Clinic, and just this month earned a Recovery & Restoration grant from the McGregor Fund.

Although the accolades and grants are welcome, they are arriving during an otherwise challenging time. “Running a crisis agency during a global crisis has kept us working really hard,” Hurst said. “We’ve been here for survivors 24/7, and unfortunately sexual assault does not stop just because the world slows down. In fact, because people often live with the person who assaults them, the coronavirus quarantines and social isolations have trapped people at home with their perpetrators.”

Looking back, Hurst counts her decision to attend Wayne State among the best she’s made. After having earned a degree in exercise physiology from Michigan State, Hurst was pursuing her master’s in kinesiology and working as a Big Ten athletic trainer at the University of Minnesota when the physician assistant career path appeared on her radar. “I was bandaging injuries and realizing I wanted to do more to help people heal,” she said. “I truly value my WSU education and being part of the PA profession.” The appreciation is mutual — in 2019, the university presented her with a community leadership award during its annual Martin Luther King Jr. Tribute.

Hurst says she was touched by the recognition, adding, “I’m grateful my PA degree has resulted in this outside-the-box opportunity to do as much as I can to expand Avalon’s mission to serve.”