If he’s being honest, Joe Tocco was a little disappointed to still be in school when the World Health Organization declared the novel coronavirus outbreak a pandemic on March 11, 2020. The second-year Physician Assistant Studies student in the Eugene Applebaum College of Pharmacy and Health Sciences suspected this global health crisis would change the course of civilization, and that one day he’d be telling stories to 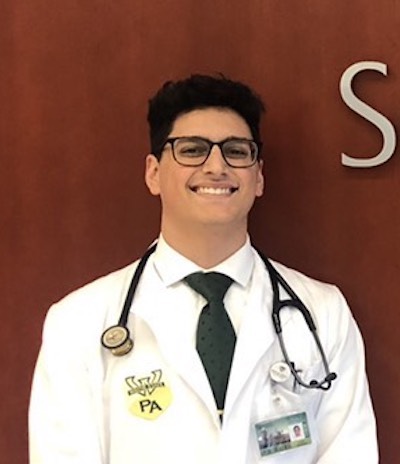 his grandkids about living through this era. But Tocco didn’t want to just live through it. He wanted to make sure others did so as well.

“Back in March, I just really wished I was already a PA so I would be able to help more,” Tocco said. A month later, he got his chance.

Tocco spent three days at the end of April volunteering at the drive-through COVID-19 testing site at the former Michigan State Fairgrounds in Detroit. During the week between winter and spring semester, when many of his fellow Wayne State University students were sheltering in place, Tocco was gearing up in head-to-toe PPE to perform hundreds of nasal swab procedures for 10 hours a day.

“I felt like I was in the exact right position to help,” Tocco said. “Not everyone in the health care field can expose themselves to hundreds of potentially contagious patients and be relatively sure they’ll be OK. I’m young and healthy, and my parents and brother aren’t high-risk. I wasn’t going to just sit back and watch it all happen when I could help.”

His family supported the decision — especially mom Mary Ann Tocco, who is a Henry Ford Health System nurse manager. “She was acutely aware of the risk so she was concerned,” Tocco said, “but she understood my feeling of needing to do something to help.”

So much so that she joined her son. On one of the days he volunteered at the fairgrounds, his mom was there with some medical assistant colleagues to train them on properly performing a nasopharyngeal swab.

Tocco said that the line of cars at the test site was nonstop, and volunteers were instructed to treat each patient as if they were positive, regardless of their symptoms or their reason for seeking results. He worked on a two-person team, rotating through duties that included performing the nasal swab, labeling the sample and packaging it in a sealed bag. “Between each patient, we degloved into a biohazard bin and sanitized our hands,” he said. “By the end of the week, the skin on my hands was completely destroyed.”

Each morning, volunteers were screened for symptoms and had their temperature checked. “I was impressed by how organized it all was,” Tocco said of the site, which is still being run by the Coronavirus Community Care Network, a coalition of local governments and health services. Operations span the Joe Dumars Fieldhouse and hospitality tents that had originally been set up to shelter shuttle passengers headed to the Rocket Mortgage Classic Golf Tournament, which was rescheduled to a TV-only event with no fans present. By the first week of July, more than 42,000 tests had been administered at the site.

Growing up as the son of a nurse inspired Tocco to become a health care professional himself. “I always saw it as two roads: You can either go into medicine or you can go into anything else. By the time I started high school, my mom’s passion for helping people influenced me to the point where health care became my only career goal.”

After graduating from Utica High School, Tocco double majored in neuroscience and kinesiology at Central Michigan University with an eye on applying to a physician assistant master’s program. WSU Applebaum became the obvious choice: “As I researched schools, Wayne State consistently popped up as the best option in Michigan because it offers unparalleled connections to Detroit hospital systems with a strong focus on getting students into rooms with patients early on in their training.”

Once Tocco arrived on campus, he made an immediate impression on his instructors. “Joe is a great student and a great human,” said Assistant Clinical Professor of Physician Assistant Studies Sara Lolar ’95, M.S. ’05. “He was just finishing his first year of academics, looking forward to going into his clinical rotations and then bam we’re all pushed into our houses by the coronavirus. It affected all of our students a lot because they wanted to get out and see patients. A number of them contacted me about volunteering at testing sites, but were understandably nervous about the risk. I told them that if they were at all nervous, they shouldn’t go out. But Joe never asked how dangerous it was. He just asked how he could help. I sent him the details and the next thing I knew, he was out there. He’s a go-getter.”

Tocco is in the middle of two research projects with Lolar, who is herself on the COVID-19 front lines as a PA in the Detroit Receiving Hospital Emergency Department. “I think all health care providers feel a duty to act right now,” she said. “The opportunity came at a fortuitous time for Joe. He’s going to be an excellent PA.”

And he’s headed in that direction, on schedule to graduate in May 2021. Tocco is hoping to be involved in research and teaching, in addition to finding a job that exposes him to a wide range of patients and conditions. “I’m looking at a surgical specialty, internal medicine, emergency medicine or critical care so I can work with patients who are in rough shape,” he said. “After going through my surgery rotation in June, I’ve realized that I really love the intensity and high stakes of surgery. I want to put myself in situations that are more difficult early in my career so that later I’ll be able to handle anything.”

That’s not surprising to hear from a guy who spent his school break testing strangers for a highly contagious and deadly disease. “At the end of each day, I was exhausted and completely wiped out. But I also had this feeling of usefulness,” he said. “I helped people get a diagnosis so they could isolate themselves or get treatment.

“Sometimes when you volunteer, you feel like you’re helping but you’re not necessarily crucial,” Tocco added. “That was not the case here. I was in the position of being able to help under extremely dire circumstances.”

Visit the Physician Assistant Studies website to learn more about Wayne State’s master of science program, which is ranked #1 in Michigan by U.S. News & World Report.