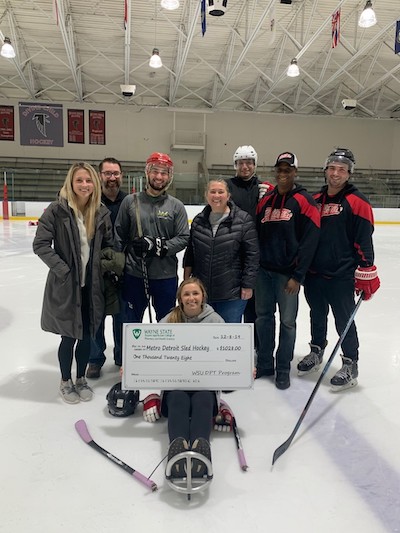 On Sunday, Dec. 8, physical therapy students from the Eugene Applebaum College of Pharmacy and Health Sciences attended a Metro Detroit Sled Hockey practice, where they presented the youth team with a $1,028 donation collected through two fundraisers leading up to the program’s PT Day of Service.

Each year, the PT Day of Service is dedicated to giving back to a cause or volunteering time to help others.

“The program chose Metro Detroit Sled Hockey for this year’s commitment because it represents many of the things that are important to the PT profession, including physical activity, inclusion, helping individuals with disabilities, and having fun,” said Assistant Professor (Clinical) of Physical Therapy Andrew Moul.

Sled ice hockey, played by athletes with a physical impairment in the lower part of the body, was invented at a rehabilitation center in Sweden in the 1960s and made its official debut as an Olympic sport at the 1994 Winter Games in Lillehammer. Sled hockey allows athletes with a wide range of mobility limitations to play, from amputees to those with spinal cord injuries, spina bifida, or any disability that limits their participation in traditional stand-up hockey.

Metro Detroit Sled Hockey is a fairly new amateur youth club in need of funds for more sleds and outreach efforts. PT students raised money through a doughnut and cider sale, as well as a "Penny Wars" competition between the classes and faculty, and its gift will allow the team to purchase one sled (which cost roughly $900) with some money left over to cover the expense of ice time, additional equipment and outreach.

Each sled hockey sled has two blades located directly under the seat and a sling-like footrest with straps. Players use two sticks, one in each hand, with metal picks on the ends to propel them across the ice.

Class of 2020 student Chelsea Shellman was able to experience the sled during practice.

“Being able to practice in the sled was such a humbling experience. It was definitely more difficult than I was anticipating,” she said. “The amount of core ad upper body strength that was needed to pick yourself back up from tipping along with propel yourself was astonishing. The amount of ambition and determination these children showed, along with their pure joy of being able to participate in a competitive sport, made this opportunity one that I will never forget.”