DPT student Bana Odeh aims for inclusivity alongside her degree

When you consider everything Bana Odeh has accomplished during her time as a physical therapy student, it’s hard to imagine she ever had her heart set on any other career. But in high school, she was leaning toward law — until her mother began experiencing dizzy spells. 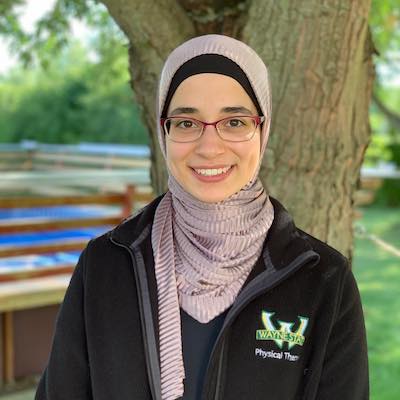 “Her doctor referred her to a physical therapist,” Odeh recalled. “She walked into her very first PT appointment feeling nauseous and walked out feeling 100% better. She talked about it like it was magic.”

Nobody in the family had ever been to a physical therapist, so they had no idea that one simple, strategic adjustment could result in so much relief. But as enlightening as that first brush with the profession was for both Odeh and her mom, it was far from perfect.

“As an observant Muslim woman, my mother requested simple accommodations like the use of a privacy screen that the PT office couldn’t or wouldn’t readily make,” Odeh said, adding that the experience opened her eyes not just to a career path but a way to make a difference in the field by working to make it more inclusive.

Now in her third year at the Eugene Applebaum College of Pharmacy and Health Sciences Doctor of Physical Therapy program and on track to graduate this December, Odeh has spent her time at Wayne State getting a head start on that goal.

She co-founded the WSU student organization IDEA (Inclusion, Diversity and Equity in Action) and holds a leadership position in the state chapter of the American Physical Therapy Association, serving on its Diversity, Equality and Inclusion Committee. She also was selected as Michigan’s APTA Centennial Scholar, a role that includes completing a capstone project on diversity and representing the state chapter at several events celebrating the association’s 100th anniversary this year.

Odeh’s most recent achievement occurred this past January, when the APTA Learning Center launched an interdisciplinary webinar that Odeh conceived of, pitched and recorded, featuring renowned diversity climate researcher Patrick F. McKay. Available as an e-learning course that grants continuing education credit for APTA members across the country, Diversity Climate: A Key for Successful Diversity Management in Physical Therapy Practice offers instruction by McKay, licensed physical therapist Leython Williams and Odeh herself — as the student becomes the teacher. 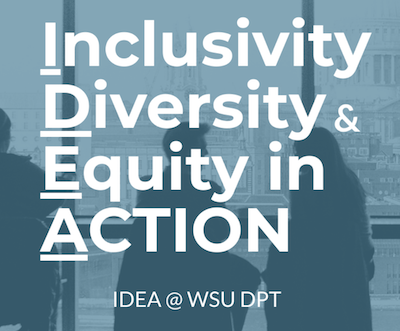 “I’m really proud of how Bana has spread her wings at the state and national level,” said DPT Program Director and Assistant Clinical Professor Kristina Reid. “What she has done is not easy, and not something people typically expect to do when starting PT school, but she has found her voice and a way to take on a leadership role.”

Odeh’s APTA Learning Center webinar discusses factors that may undermine an organization’s diversity efforts, how the concept of diversity climate — a group’s shared perceptions of the extent to which their organization values diversity and is fair and inclusive of all members as reflected in its policies, practices and procedures —offers a solution to diversity management, and workspace interventions that lead to better diversity management.

April Gamble took the class from Kurdistan, Iraq, where she is founder and CEO of the American Center for Rehabilitation, an organization that leads the development of justice-centered services in both private and public sectors to meet the needs of the diverse communities in Kurdistan.

“I appreciated how the course was a helpful mix of research evidence, personal experiences and practical strategies,” said Gamble, who is from Michigan and remains involved with the state’s APTA chapter. “The topic of cultivating diversity climates within our profession is essential, as it is a powerful way to address health disparities.”

Gamble said she found the instructors’ voices and perspectives to be “authentic, personal and inspiring. I thank them for creating this course content so that as a profession, we can move forward together to create impactful diversity and inclusion initiatives.”

That was precisely Odeh’s goal. “I hope the course serves as a way to reaffirm the notion that diversity — whether it is ethnicity, race, disability, etc. — is incredibly valuable for an entire team if managed correctly,” she said. “I think we have a lot to work on and to discuss, but I am proud and devoted to WSU and to this message.”

In February 2020, the APTA published a blog post Odeh wrote called “Understanding the Muslim Community from a PT-Specific Lens.” Odeh said that although she felt strongly about representing and advocating for her community, she initially was concerned about what the reaction might be. “I was worried I would get comments about Muslims that I didn’t want to hear, but I did it because it was the right thing to do and it ended up being incredibly well received,” she said. “It opened a lot more doors for me than I realized existed.”

Indeed, it put her on the radar of APTA leadership. Later that year, when the APTA Michigan Waves Podcast aired a six-episode series on diversity in the profession, Odeh was interviewed about her journey and future plans to help the Muslim community, saying, “I am so proud of the raw, bold and unapologetic discussions we had.”

Then in November 2020, Odeh wrote “COVID-19: Shedding Light on Minority Accommodations” for APTA Michigan, highlighting how quickly the PT profession was able to accommodate and adapt to the pandemic in contrast with its historic inability to address and accommodate the needs of minorities.

With each publication, Odeh broadened people’s horizons. Comments below her COVID column offered effusive feedback, such as this message from an anonymous reader: “Love your transparency!! This sheds light on problems that many face but are afraid to speak up in fear of retribution. Equality in our profession must definitely begin at the school program level where the basics of learning begin. Very proud of you for sharing your truth, enlightening us and speaking up for others!!!”

Positive reactions such as this confirm for Odeh that she’s on the right track: “When you feel more confident in yourself, it changes everything.”

Odeh’s entire family is Warrior Strong, starting with her father, who holds a master’s degree from the College of Engineering, and her mother, who defended her College of Education PhD dissertation with Odeh in attendance. Odeh herself earned bachelor’s degrees from Wayne State in health sciences and health psychology before entering WSU Applebaum, and her two older brothers and two younger sisters all are either alumni or current students.

In fact, it was brother Amer Odeh, a College of Liberal Arts and Sciences doctoral student in industrial/organizational psychology, who inspired Odeh to take matters into her own hands when she encountered diversity and inclusion issues in the classroom. “My brother explained to me that culture is set by the leaders of an organization; it’s a top-down phenomenon. Those words stuck with me, and I pushed myself to apply to the Centennial Scholar program and set myself up to become the leader I wanted to see in PT.”

Odeh also got key advice from a Detroit Medical Center resident physician and WSU alumna she met in line at Starbucks at the beginning of her second year in PT school. After Odeh complimented Dr. Hajra Khan on her hijab, the two struck up a conversation. When Odeh told Khan that she felt like an outsider in her cohort, Khan said that whether or not people like you, you still want them on your side. You want them to realize they’re better off with you than without you. Odeh had been feeling overlooked but Khan helped her realize that she wasn’t doing anything deliberate to assert herself.

Shortly after that, Odeh approached a woman in her mosque who was organizing a STEM event for Muslim women at Google’s Ann Arbor campus. “I felt bolstered to say, ‘Hey, you’re discussing STEM but do you have a PT speaker?’” They did not — and recruited Odeh on the spot.

“It was phenomenal to walk through Google to see how they address diversity,” Odeh said of the 2019 event. “I spoke on PT and made sure I let my professors know about it. It was a big step for me to acknowledge that achievement, since I tended to stay quiet about these things. It changed how I looked at my place in the program.”

Reid notes, “Bana is very passionate in a thoughtful and purposeful way. As we worked together, we came to recognize that students need to feel a better sense of belonging from the time of admission — we shouldn’t wait until the first day of class. It is challenging to learn when you don’t feel comfortable, and we can help make a difference.”

To that end, Reid and her team have incorporated more conversations about inclusion and cultural competence into orientation, saying, “It’s important to give students a safe space to express themselves without judgment or consequences.”

As Odeh looks ahead to graduation, her goal is to find a position where she can continue to learn through on-the-job experience and mentorship. She’d like to treat Muslim patients and continue speaking out for their rights. And she’s absolutely planning to stay active in APTA.

She’s happy to have made a lasting impression on the program and her profession, but she’s far from done: “If an organization is treating everyone as a valued member, people will be more motivated. When it’s done right, there is no downside to diversity and inclusion.”