Eugene Applebaum College of Pharmacy and Health Sciences Associate Professor of Physical Therapy Moh H. Malek was recently notified by The Journal of Physiology that his paper titled, “(‑)‑Epicatechin enhances fatigue resistance and oxidative capacity in mouse muscle” was cited 100 times within 10 years. 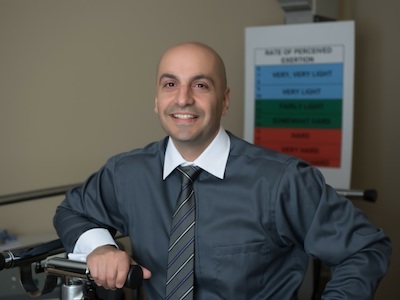 The premise of the Century Citation Club is that 100 citations represents a citation rate roughly twice the average for The Journal of Physiology and then maintained for a decade — these papers are exceptional, they have made their mark and have changed their fields. The Journal of Physiology is one of the most prestigious journals in physiology, ranking first out of 81 other physiology journals in total citations in 2020.

The compound (‑)‑epicatechin is derived from cocoa seeds and was first shown to have cardiovascular benefits by a group at Harvard University. Malek’s research team aimed to determine if the compound would enhance the bioenergetics of skeletal muscle.

“We wanted to see if we could reverse the aging induced reduction in energy production of the muscle independent of aerobic exercise training,” Malek said.

Thus, the research team gave a low dose of the compound twice daily for 15 days. They found that exercise tolerance was enhanced and this was, in part, due to increases in capillarity and mitochondria of the skeletal muscle, which are critical components to energy production. The findings of the study received national and international attention by various media outlets such as The New York Times and the Daily Telegraph.

“This study was the springboard to a number of follow-up studies examining the role of (‑)‑epicatechin on skeletal muscle structure and function,” Malek said.

Indeed, he has published six other peer-reviewed papers using this compound under different experimental conditions. In fact, one of his other papers received the Scientific Manuscript Excellence Honor, called the Dr. Gary A. Dudley Memorial Paper, from the Journal of Strength and Conditioning Research.