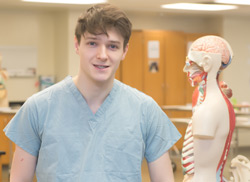 N. Dominic Alessio, PA(ASCP)cm, a 2016 graduate of the WSU Applebaum pathologists' assistant program and a clinical preceptor in the program, has been named to the American Society for Clinical Pathology (ASCP)'s annual 40 Under Forty list.

The program recognizes members under the age of 40 for their achievements, leadership, and impact on the profession of pathology and laboratory medicine. The program has recognized members of laboratory teams across the country and internationally.

While he was a student, Alessio and colleague Brittin Cavanagh co-founded the AAPA Student Committee with the mission of connecting and supporting pathologists' assistant students across the nation; the committee has now grown to reach hundreds of students from all training programs in North America. In 2016, he received the ASCP National Student Honor Award and a Siemens-ASCP Scholarship, and he was a co-recipient of the 2018 Board of Trustees Award in recognition of outstanding volunteer service to the AAPA and the pathologists' assistant profession. He was voted preceptor of the year by the WSU Applebaum pathologists' assistant graduating class of 2019.

The ASCP is the world’s largest professional membership organization for pathologists and laboratory professionals with more than 100,000 members. It guided the application and evolution of the pathology and laboratory medicine specialty since 1922.