Madison Morrison was a medic stationed at Fort Leonard Wood in Missouri when a soldier came into the ER with a severed ring finger.

Morrison was just a few days into ER duty after having spent a year in the U.S. Army installation’s clinic, drawing blood and briefing soldiers who were beginning their basic combat training — important work, but she had been yearning for a faster pace with higher stakes.

And she found it, as evidenced by the man with the missing finger. The pace was fast and the stakes were high, but everyone around her was calm, cool and collected — and so was she. “It takes a certain kind of person to remain calm amidst the chaos and intensity of emergency situations,” she said. “I absolutely felt like I was in the right place.”

She had that feeling again a few years later when she visited Detroit to attend the Eugene Applebaum College of Pharmacy and Health Sciences Pathologists’ Assistant Industry Night after researching master’s program options while on reserve duty. “I met Dr. Lou Kramer and she immediately became my mentor,” Morrison recalled. “It was just like that moment in the ER. I felt like I was among people who share the same passion.”

Now she is halfway to her two-year Master of Science in Pathologists’ Assistant degree at Wayne State, mentoring a first-year student and serving as a teaching assistant for Program Director and Assistant Clinical Professor Veralucia “Lou” Mendes-Kramer. Morrison has no doubt that she’s in the right place.

As a high schooler in California’s Bay Area, Morrison was on the college track. She was interested in a medical field career but didn’t see a clear path for herself as graduation approached in 2012. Then she sat down with an Army recruiter. “My parents were just as shocked as you are,” Morrison said. “But it felt right. I could get military training and become a nationally certified EMT. It was a way to get my foot in the door and get life and field experience.” 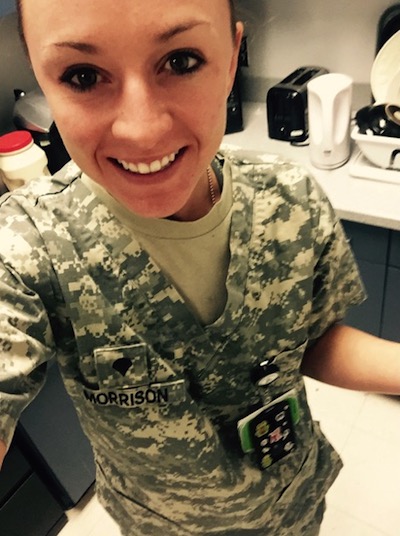 After results of her Armed Services Vocational Aptitude Battery qualified Morrison to be a combat medic, she spent six months in basic training that included Advanced Individual Training for her EMT license, and then it was off to South Korea in 2013. “I had expected to be deployed to Afghanistan or Iraq, but instead I was stationed at the base closest to the Demilitarized Zone — as far north as you can go without being in North Korea,” she said. “My job was to provide medical support to training operations which involved taking an ambulance to training sites, where we treated a wide range of injuries from minor to life-threatening.”

She went from Korea to Fort Leonard Wood, where she first met her now fiancé, William Welsh. As it turns out, Welsh also is from California and was stationed in Korea during the same time frame as Morrison, but the two did not cross paths until they were both in Missouri.

Morrison advanced to the rank of sergeant during her four years of active duty, then enrolled at West Virginia University to earn her bachelor’s in biology before moving to the Detroit area with Welsh and enrolling at Wayne State University. Prior to the pandemic when classes moved online, she had a lengthy commute to campus. “Not having to drive more than an hour there and back has been a beneficial time-saver, but I miss seeing my classmates in person,” she said.

To remedy that, she gathered some of them together in June when Welsh’s environmental hazardous waste cleanup company came to Detroit for a volunteer project at Riverside Park. Not only did members of Morrison’s second-year cohort come out on a steamy summer day but several first-year pathologists’ assistant students showed up ready to work as well, including Haley Pereira, Morrison’s mentee.

“Because Wayne State classes went online at the beginning of my program, the volunteer event was the first time I met Madison and my classmates in person,” Pereira said. “Madison has been pretty amazing all along. She was very proactive in getting to know me and offering advice. She points me in the right direction without giving me outright answers and says, ‘If I can do it, you can do it,’ which is really what I need to hear.

“We’re often told that this is a pretty intense program, but having Madison as a mentor has made it less stressful.”

That comes as no surprise to Matthew McLain. The assistant director of Wayne State’s Office of Military and Veterans Academic Excellence says that service members bring an unflappable sense of responsibility to the table. He also is not surprised that Morrison chose to enlist in the Army instead of enrolling in college. 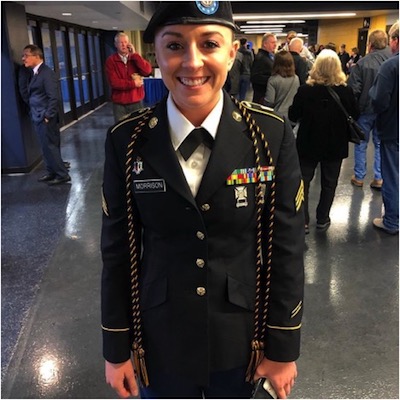 “Those who aren’t familiar with the military’s high standards might think that people enlist because they don’t have options,” McLain said. “But there are physical and aptitude standards that play into admission. Just making the cut to be a service member means you’ve done so much to prepare yourself. Couple that with the ethos of integrity shared by the military community and it gives you a good indication of someone’s character.”

Morrison agrees that her years of active duty were invaluable. “As a noncommissioned officer, I had a leadership role with soldiers working under me. I mentored and counseled them, and it gave me the skills I use now to build relationships with people and professors,” she said.

She is currently aiming to follow in her mentor Kramer’s footsteps to become a forensic PA, but has recently discovered a passion for the surgical setting. Wherever her path leads, she knows WSU Applebaum will prepare her well: “The pathologists’ assistant program is amazing. When I found it, I thought, ‘Oh my gosh, this is exactly what I’ve been looking for.’ It makes perfect use of my medical and military background.”