Proving her Worth: In a four-decade journey, professor goes from student to director

When Dr. Prudentia Worth enrolled in Wayne State University’s anesthesia program as an 18-year-old private duty nurse, she never imagined that 46 years later she’d be running the place. 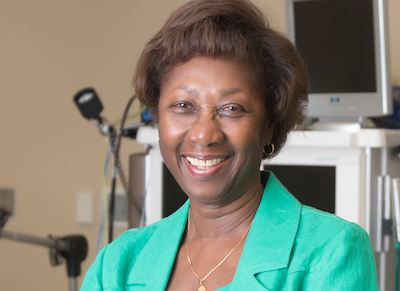 Born in the Caribbean island nation of Grenada, Worth began her nursing education in London before moving to New York and then Detroit. It was at Henry Ford Hospital that Worth had an everyday encounter that ended up being a life-changing moment.

As a private duty nurse, Worth wasn’t comfortable with how little was being asked of her in what some would call a cushy job. “I wasn’t used to not working when I came to work,” she recalled. One day, after a cantankerous patient brushed aside all of her attempts to care for him — not even allowing her to tilt the window blinds— he banished her to the hallway.

As Worth sat outside his door awaiting further orders, a surgeon passed by and struck up a conversation. He suggested a career move and directed her to a man named John Garde, who had recently co-founded a Wayne State program training nurses in anesthesia management.

“Nurse anesthesia was not practiced in England so I didn’t even fully understand what I was getting into,” Worth said. A month later, though, she was fully enrolled. Despite passing the application and interview process, Worth felt like she was in over her head: “I struggled. I cried a lot. People were so intimidating. But I felt as though I could learn, even though it was a struggle.”

And learn she did. Under Garde’s tutelage, Worth studied and eventually gained confidence. “It was a phenomenal, rewarding experience to have it all click,” she said. “It became clear what the role of a nurse anesthetist should be. I wanted to show them I could do it. The challenge becomes the reward.”

The experience taught her that not all students proceed at the same pace, and informed an approach to teaching that would guide her through the next 40-plus years.

After working as a staff nurse anesthetist in local hospitals throughout the ’70s, Worth took on the role as education coordinator in the Eugene Applebaum College of Pharmacy and Health Sciences in 1980. She rose in the ranks to director of anesthesia services at Detroit Receiving Hospital — holding that position until 2008 — and succeeded Garde as director of Wayne State’s nurse anesthesia program in 1988. She has served on more than a dozen professional committees, publishing as many articles and earning an equal number of awards and honors along the way.

Through all of this, Worth has become a WSU Applebaum cornerstone. The assistant clinical professor and director is deemed by colleagues and students alike to be paramount to the success of the Doctor of Nurse Anesthesia program.

Eduart Amiri, who graduated from Wayne State’s nurse anesthesia program in August 2015, chose the profession because he wanted to do something that was both respected and challenging. After earning bachelor’s degrees from Oakland University in biology and nursing, Amiri was accepted by several anesthesia programs. But Wayne State was far and away his top choice. He said Worth had a lot to do with that: “Wayne State’s reputation — and specifically the reputation of the anesthesia program — is that they are the best at preparing students for success in their careers.” 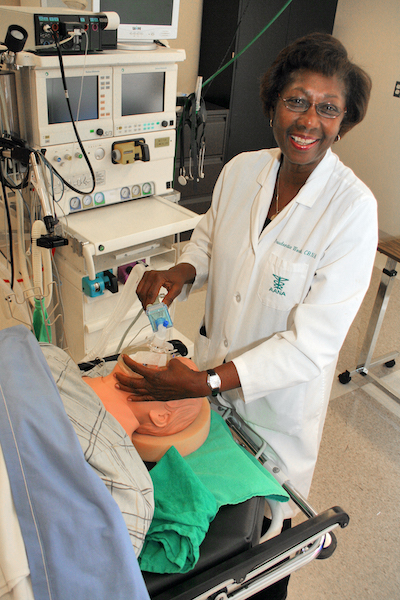 One way Worth and her team accomplish this is through an intensive midterm evaluation process that allows students to right the ship before it’s too late. “Our students give up a significant amount of time — with their families and in the workplace — to be in this program,” she said. “So it’s important to me that if they are struggling, we identify any issues when there is still time for improvement.”

She also has obtained grants to keep her classroom on the edge of technology, which, among other things, allowed for expert guest speakers to lecture students from across the country well before the pandemic made that a more common occurrence.

“Dr. Worth is highly revered not only by the Detroit anesthesia community but nationwide,” said former student Oluwaseyi Lawal. “I cannot quantify just how much I gained academically and professionally from being part of the nurse anesthesia program family and a student under her direction.”

Worth wouldn’t have it any other way. “I never forget that students are integral to everything we do at Wayne State,” she said. “My life is centered around doing the best I can so they can do the best they can.”

And it shows. “I’ve been through four different degree programs and I’ve had a lot of instructors and I can tell you that Dr. Worth really stands out,” said alumnus Amiri. “I knew coming into the program that she is someone who everyone held in high regard. As I neared graduation, I realized how fortunate we were to have someone like her serve as director of our program. She is a light and a beacon for all of us.”

A version of this story originally appeared in a 2015 edition of the Synergy newsletter.