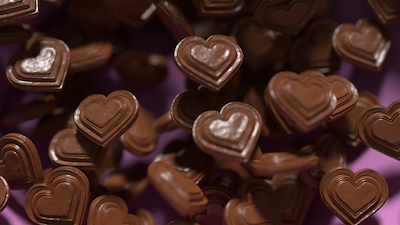 Having trouble choosing the perfect gift for your sweetheart? Look no further than dark chocolate. According to multiple studies by Wayne State University Associate Professor of Physical Therapy Moh Malek, the popular confection contains a compound found to mimic some effects of exercise.

The compound, a flavonoid called epicatechin, occurs naturally in cacao beans and seeds; in fact, it’s what causes the bitter taste in dark chocolate. For years, Malek, of the Eugene Applebaum College of Pharmacy and Health Sciences, and his collaborator Maik Hüttemann, a professor in the WSU School of Medicine, have been studying epicatechin’s effects on muscles under various perturbations such as aerobic training, detraining and unloading.

In their trials with rodent models, Malek and Hüttemann have shown that epicatechin increases mitochondria – the body’s top cellular-level energy producers – similar to performing aerobic exercise.

“Mitochondria are known as the ‘powerhouses’ of the cell because they provide energy to working muscles,” Malek said. “What we found was that in older mice that received either epicatechin or aerobic training alone showed similar mitochondrial increases and skeletal muscle adaptations after eight weeks. Moreover, mice receiving both exercise and epicatechin showed synergistic effects in skeletal muscle structure and function.”

These findings were published in Cocoa as a Medicine: The Present and Future of Cocoa Research, a special issue of the journal Frontiers in Pharmacology

However, Malek warns, don’t give up exercise. “Dark chocolate is not a true substitute for exercise, which has vast physiological benefits,” he said. “But, from what we’ve seen, it does have the potential to attenuate changes in muscle structure and function from negative perturbations when the ability to exercise may be limited.”

Malek and Hüttemann have moved on to new lines of inquiry, but they’ve paved the way for other researchers on the health benefits of dark chocolate. This year, researchers in Poland confirmed that its consumption may be a good way to reduce cardiovascular risk, observing beneficial effects from lowering blood pressure and cholesterol to balancing blood sugar and working as an anti-inflammatory.