Robert Hellar was honored with a Wayne State University Advocate, Ally, and Accomplice Award for his efforts help to create an inclusive, respectful and safe climate for members of the LGBTQ community on campus. The award was presented at the university's Rainbow Graduation, Awards and Homecoming ceremony on April 12, 2019. Hellar is an academic services officer in the Eugene Applebaum College of Pharmacy and Health Sciences and a two-time WSU alumnus ('04, M.Ed. '19).

"Robert is a champion of the LGBTQ community at Wayne State," said Mary Clark, associate dean for student affairs at WSU Applebaum. "He has been instrumental in creating an atmosphere of inclusivity and respect all over campus and especially for our pharmacy and health sciences students. We are so proud to have him as a respected and caring member of the WSU Applebaum family."

Hellar has served the Wayne State community as an employee in various departments for over 20 years. At WSU Applebaum, he serves on the Council for Diversity and Inclusion and co-chairs the EACPHS Diversity Scholarship Committee. 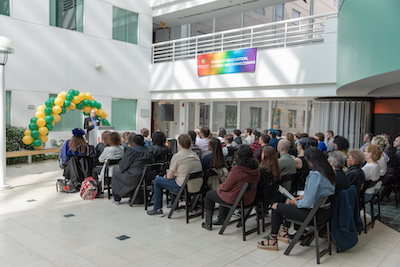 "This is the only award given by faculty and staff to faculty and staff at Rainbow Graduation, which makes it special because it shows peer appreciation," said Simone Chess, associate chair and director of undergraduate studies and associate professor of English. "We were delighted to celebrate Robert because of his commitment to serving the queer community on and off campus as a WSU alum and employee."

As an openly gay male, Hellar has served as an elected official in the City of Ecorse for over 22 years in the capacities of city councilman, city assessor and deputy mayor. He is active in the LGBTQ community, volunteering at several Pride events in the Detroit area as well as serving on several organization leadership boards. He has been a board member and former president of the Wednesday Pride Bowling League. He has been very active in the LGBTQA Metro Detroit Softball League (MDSL) for over 16 years. He has coached several teams, represented Detroit in several tournaments across the United States and served on the Board of Directors as well as league commissioner for several years.

Hellar said he is humbled and honored to receive the award.

"On the 50th anniversary of the Stonewall Riots, we are here to celebrate the PRIDE that each of us has a member of the LGBTQ community. We need to remember where it all began, realize the struggles encountered along the way and recognize the work that still needs to be done in the world, in our country, in our city and on our campus community," he said. "I have worked diligently and will continue to get the message clear that 'Love is Love' and we shall all be treated equally."

June is Pride Month across the country. There are many opportunities to get involved at Wayne State, including: