Professor of Physical Therapy Moh Malek, PhD, FACSM, FNSCA, has received the 2022 President's Award for Excellence in Teaching from Wayne State University. He was honored at the university’s Academic Recognition Ceremony on Thursday, April 28. 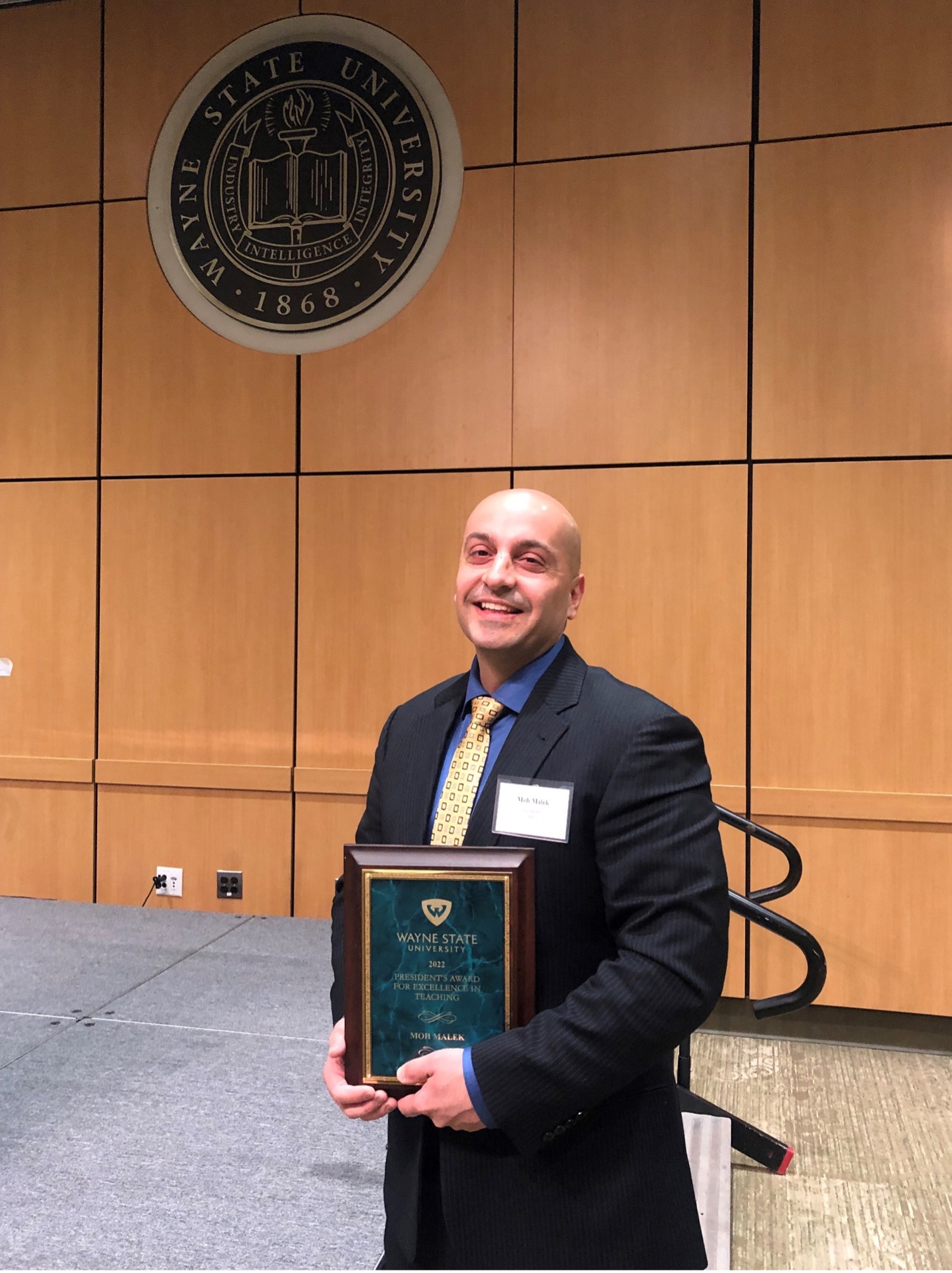 These awards, presented annually since 1977, recognize faculty members who have made outstanding contributions to teaching. Honorees must demonstrate innovation in instructional design, delivery and course management, as well as evidence of the impact of their teaching on their students and their field.

A faculty member of the WSU Eugene Applebaum College of Pharmacy and Health Sciences since 2010, Malek is known for his expertise in exercise science, research and statistics, all of which he brings to bear in the classroom. He earned tenure in 2016 and promotion to full professor in 2021.

“As a training exercise physiologist and productive researcher, I draw on my experiences to bridge the gap between the classroom and real world,” Malek said, noting that his primary focus is on developing critical thinking skills that will serve students as they move into roles as full-time clinicians. He also takes pride in engaging students who hold varying levels of preparedness, cultural values and goals.

Malek is responsible for two full-semester graduate classes in the Doctor of Physical Therapy (DPT) program, Exercise Physiology II (PT 6310) and Research for Health Sciences (PT7700), regularly earning excellent student evaluations. Students who have worked with Malek reflect on how important these premises were to their learning. And they are still singing his praises: A group of WSU Applebaum DPT alumni worked together to support Malek’s nomination for the award.

“His teaching approach was like what you expect for a seminar course rather than a typical lecture course where students are feverishly taking notes,” their collective letter said. “One of Dr. Malek’s famous lines in our Advanced Physiology course was, ‘I don’t want you to memorize the information, but rather understand it and appreciate how various diseases influence the normal physiological responses.’”

Interim Dean of Health Sciences Sara Maher sees clear evidence of his success. “Dr. Malek has consistently demonstrated the ability to help students master content in statistics and exercise physiology, no matter their background. He is gifted in enabling his students to develop the craft of critical thinking,” she said.

“Dr. Malek taught us that research is simply a set of steps,” his former students wrote. “We remember him saying, ‘There is no mystery in how to conduct research and publish a manuscript. It’s a series of processes and anyone can do it if they are willing to spend the time and master the process.’”

Over the past 10 years, Malek has been the primary mentor for approximately 20 research groups (more than 60 students). His mentorship model is having the students involved in all aspects of research from developing the research question to collecting/analyzing the data to writing the manuscript. Indeed, Malek’s mentorship model has proven effective as 100 percent of his research groups publish their work in well-respected sports science journals. Moreover, his groups consistently receive the DPT program’s Outstanding Research and Scholarly Achievement Award for this accomplishment.

Dr. Maik Huttemann, professor and division director for research in the WSU School of Medicine, frequently collaborates with Malek on research, teaching and mentoring. “Moh’s mentorship model is exceptionally powerful as all of the physical therapy student research groups that he has mentored have their projects published in peer-reviewed journals,” he said.

A sample of the breadth and depth of research his groups have conducted include:

Malek is always willing to go above and beyond to support the learning of those around him, including doctoral students outside of his home program and faculty members. He has routinely taught statistics workshops for the Wayne State Graduate School professional development series for grad students and post-docs.

Associate Professor of Occupational Therapy Dr. Rosanne DiZazzo-Miller related that Malek played a significant role in developing her confidence in statistics and research design. And Assistant Professor Bincy Joshwa of the WSU College of Nursing cited how Malek has been invested in her personal growth since her days as a doctoral student.

“Although Dr. Malek is in a different college at Wayne State, he has shared his experience on what key characteristics make a junior faculty member, such as myself, successful. I know that anytime I need advice, Dr. Malek is more than willing to call, e-mail or Zoom,” Joshwa said.

Malek also contributes to education of students through his publications, including two popular textbooks. He is a lead-author on Advanced Statistics for Kinesiology and Exercise Science, which he developed out of an identified need to assist kinesiology students with a step-by-step approach to performing advanced statistics such as Multivariate Analysis of Variance (MANOVA) and model building. He also is co-editor for the second edition of the National Strength and Conditioning Association’s Essentials of Personal Training 2nd Ed.

These two books have reached tens of thousands of students and practitioners, evidence of his substantial academic footprint. To this end, Malek was nominated at the end of 2020 for the Educator of the Year Award by National Strength and Condition Association, which speaks to his noteworthy contributions to education and clinical applications of strength training and conditioning, and clearly defines his recognized national contributions to the education of students.

The effects of Malek’s teaching, publications and mentorship are long-lasting. In the words of his former students, “Despite being one of the leading scientists in his field, Dr. Malek showed humility and instilled confidence in us. He has been a very positive influence in our lives.”

An anchor in urban health care

The Eugene Applebaum College of Pharmacy and Health Sciences is built on more than 100 years of tradition and innovation in the heart of Detroit. We have grown deep roots in our city, harnessing its powerhouse hospital systems and community service organizations as vibrant, real-world training grounds for students, with an ongoing focus on social justice in health care. And our research at all levels – from undergraduates to veteran faculty members – translates into creative solutions for healthier communities.