It may seem counterintuitive, but health care does not stop at the moment of death.

In fact, funeral service professionals are just as present on the front lines of the pandemic as physician assistants, nurse anesthetists and other health care specialists who have honed their skills at Wayne State’s Eugene Applebaum College of Pharmacy and Health Sciences. 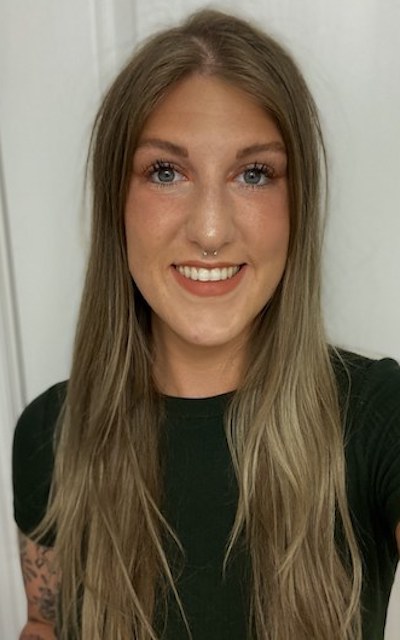 Take for example Hailee Trombley, a 2018 Mortuary Science program graduate who didn’t think twice about hopping on a plane when her employer asked her to head from Houston to Los Angeles to help embalm the many who died during California’s record-breaking COVID-19 surge this past January. Timely, professional death care is essential not only for public health to check the spread of disease, but also for the mental health of the living as they process the loss of a loved one.

Trombley works for Houston’s Forest Park Lawndale Funeral Home, an affiliate of Service Corporation International, which has more than 2,000 locations in its network, including LA’s Rose Hills Memorial Park and Mortuary. And that’s where Trombley was needed.

She answered the call, working 12-hour days with respect and expertise. When Trombley returned home after her two-week rotation, she barely had a chance to catch her breath before encountering a Texas-sized problem: A winter storm was barreling down on a southwestern state whose infrastructure isn’t built to handle ice, snow and freezing temperatures.

In mid-February, millions of Texan homes and businesses went for days without electricity — including Forest Park Lawndale, which was of particular concern because the coronavirus showed no signs of losing power. In fact, the storm coincided with a surge that saw double the amount of COVID deaths in Houston than the previous peak in August 2020.

“The day before the storm hit, I anticipated how bad it would be and took my laptop home so I could still work with families if we ended up having to close,” Trombley said. That was smart, because her funeral home did indeed need to close — for three full days. “The roads were so dangerous and everyone lost power, so we had to reschedule services and postpone burials. It took us two weeks to catch up.”

Trombley may have been able to weather the storm better than some colleagues and neighbors, having endured more than 20 years of Michigan winters before she graduated from WSU and headed south.

“Hailee was one of three students who received a scholarship from Service Corporation International that included a trip to their home office in Houston for additional interviews,” said Assistant Clinical Professor Lauren Budrow, who taught Trombley’s cohort after joining the WSU Applebaum faculty in 2017. “It was on that trip that the SCI leadership discovered Hailee spoke fluent Spanish, and quickly realized her potential for their Hispanic market in Texas. They offered her a job soon after.”

Moving so far from home hadn’t been Trombley’s plan, so she asked for her trusted instructor’s advice.

“I encourage every student to practice funeral service in another part of the country at some point during their time in the profession when possible,” Budrow said. “Customs and practices are not the same from state to state and region to region, and being a funeral director in another part of the country enriches you through experiences and perspectives you might not otherwise ever get.”

That has certainly been the case for Trombley, who said, “Forest Park Lawndale is a combination funeral home and cemetery, which isn’t done in Michigan. And most people I work with here in Houston are licensed as either embalmers or funeral directors, not both under one license like in Michigan.”

Trombley had only been on the job for about a year when the coronavirus hit Texas. “There’s no way to train or prepare for what we went through at the beginning,” she said. “It was really frustrating and sad. We had to change our policies on an almost-daily basis because experts didn’t yet know what was best. It wasn’t easy telling a family they couldn’t have a service for their loved one who had died of COVID-19. In those early days, as we shifted from being shut down completely to only offering livestreamed services to being able to allow just a few immediate family members graveside for just one hour — it felt like we were carrying the weight of every family’s grief as we worked to keep everyone as safe as possible.”

More than a year later, she’s able to see a few silver linings: Livestreamed services allow out-of-town family members to be part of the proceedings, and electronic signature apps give folks greater flexibility when making arrangements. “The pandemic has made our traditionally conservative industry more progressive,” Trombley said. “For example, some people are intimidated by the thought of sitting face-to-face with a funeral director, but now they are able to make decisions from the comfort of their own home. We plan on keeping virtual arrangements in place for anyone who wants that going forward.”

This compassion does not surprise her former instructor and now friend. “If each of my students was a superhero, Hailee would be the Social Justice Warrior,” Budrow said. “She is always defending those she feels are oppressed or underrepresented. She believes in her causes, and they fuel her to step up when there is a need. I especially appreciate her willingness to see someone else’s perspective and take it into consideration, even as she paves her own trail.”

While she was in LA, Trombley worked alongside several other funeral service professionals from across the country, including another Wayne State alum who flew to the West Coast from Michigan. Although Trombley handles just about every task from start to finish in Houston, she was strictly on embalming duty at Rose Hills, which is the largest funeral home in the SCI network and includes a sprawling 1,400-acre cemetery.

“Pre-COVID, they were doing around 9,000 services a year, but in 202o they did closer to 14,000,” Trombley said. “Even with such a big staff, there were so many deaths at the beginning of 2021 that they needed backup. The building I worked in had previously been used for visitation, but because indoor services weren’t allowed at that time, a bunch of little chapels had been converted to accommodate the increased need for storage and care of the deceased.”

The experience felt surreal to Trombley, who didn’t grow up in the funeral service industry — often a family business. She wanted a health career but wasn’t finding a good fit until her high school microbiology teacher suggested she job shadow a local funeral director.

She loved that the profession combined science with psychology, and that it treated both the dead and the living.

“I never could have imagined working through a pandemic so soon after starting my career,” Trombley said. “But at the end of the day, I got into the industry to help people through their most difficult days.”

WSU Applebaum information meetings for prospective students take place at 6 p.m. on the first Tuesday of each month. Applications for the Mortuary Science program are due June 1.