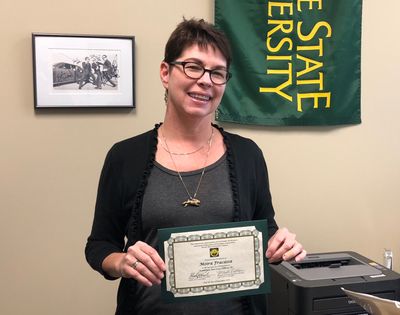 Moira Fracassa, an advisor in the Eugene Applebaum College of Pharmacy and Health Sciences Student Affairs Office, was recently promoted to academic services officer IV. On Tuesday, Sept. 25, 2018, she was honored by the American Association of University Professors - American Federation of Teachers (AAUP-AFT) Local 6075, Wayne State University Chapter, for the accomplishment.

Fracassa has been an EACPHS academic services officer (ASO) since 2010 and was previously an ASO in the Wayne State College of Nursing. She served as interim assistant dean in the Office of Student Affairs in the College of Nursing from November 2008 to September 2009. Before coming to WSU, she was coordinator of undergraduate advising for the School of Business Administration at Oakland University and an advisor at the University of Detroit Mercy. She earned her undergraduate degree in English at the University of Detroit, and an MA in English and MLIS from WSU. She is currently pursuing a post-master’s certificate in peace and conflict studies.

Fracassa is a long-time member of the National Academic Advising Association (NACADA). She is also a member of the American College Personnel Association-Michigan (ACPA-MI) and Michigan Academic Advising Association (MIACADA). She has served in a number of roles in professional organizations, including communications chair for the annual ACPA-MI conference, member-at-large on the ACPA-MI leadership team, registration co-coordinator for the ACPA-MI Equity Summit,  program reviewer for the American College Personnel Association Annual Conference, and was on the leadership team of MIACADA as secretary.

Moira has served on the WSU Academic Senate and its facilities, support services, and technology subcommittee, and is currently secretary of the AAUP-AFT Local 6075, an elected position. Fracassa received an Outstanding Contributor Award from the WSU Academic Staff Professional Development Committee in 2007.