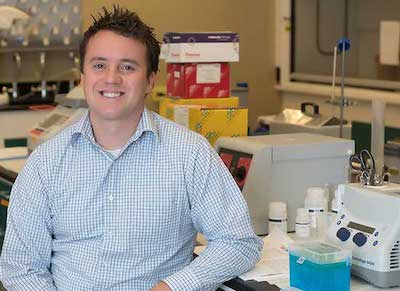 Wayne State University Associate Professor of Pharmacy Practice Kyle Burghardt has been honored with the 2020 New Investigator Award from the American College of Clinical Pharmacy (ACCP). He will be recognized during the organization's annual meeting in October.

The New Investigator Award recognizes an ACCP member who has made a significant impact on an aspect of clinical pharmaceutical science. The awardee must have been a member of ACCP for more than three years, must have completed his or her terminal training or degree less than six years previously, and must have a research program with a substantial publication record that includes a programmatic theme or an especially noteworthy single publication.

Burghardt, who was recently promoted to associate professor in the Eugene Applebaum College of Pharmacy and Health Sciences, received his PharmD degree with distinction from the University of Michigan and completed a three-year research fellowship at the U-M College of Pharmacy's Department of Clinical, Social and Administrative Sciences. His research focus is in psychopharmacology and pharmacogenetics, and he has received over $1 million in grant funding. He is conducting two ongoing NIH-funded grants studying mechanisms of antipsychotic medication–induced insulin resistance.

At the time of his nomination, Burghardt had published more than 30 papers in peer-reviewed literature, including first-author publications in high-impact journals such as Pharmacotherapy, the Journal of Psychiatric Research, and the International Journal of Genomics. Vicki Ellingrod, the U-M John Gideon Searle Professor of Clinical and Translational Pharmacy, commented on Burghardt’s qualifications for the New Investigator Award in her letter of support:

The line of research that Dr. Burghardt has decided to undertake is highly novel. As his initial investigations focused on a peripheral epigenetic analysis (as peripheral blood samples were readily available), his transition to independence has led him to directly investigate skeletal muscle. His research program combines epigenetics with the field of proteomics by looking in an important insulin-sensitive organ, the skeletal muscle, to address a significant gap in knowledge for antipsychotic-induced insulin resistance. This line of investigation is critical for those of us within the neuropsychopharmacology field, as we still do not understand the mechanism of antipsychotic-induced insulin resistance and use of these medications seems to be growing at an alarming rate. Furthermore, Kyle’s work will have a much broader impact within the field of diabetes, in general, as he has been using the extreme of antipsychotic-associated insulin resistance as a drug-induced model of diabetes. His efforts have identified a novel gene, and he has begun testing his hypotheses related to this discovery through an innovative, yet feasible, trial design. Work he currently has ongoing (and has recently obtained NIH support for) uses a 1-week, randomized, placebo-controlled trial in healthy subjects with olanzapine. By using a healthy subject cohort, he will be able to parse out the antipsychotic-specific metabolic effects independent of confounding factors that we know co-occur in psychiatric disease.

Jeffrey Bishop, associate professor in the Department of Experimental and Clinical Pharmacology at the University of Minnesota College of Pharmacy, added in his letter of nomination:

Kyle is unique as he brings a wealth of equally balanced basic and clinical research experience from his 3 years of a postdoctoral fellowship. The quality of his work is exemplified by his substantial publication record, grants, and awards. He continues to develop research skills, and his career path for this development is clear and realistic and will have significant impact on the field of psychopharmacology and clinical pharmacy research. He has had great success as a new faculty member obtaining NIH, foundation, and local grants at a time when funding has been tight. This speaks to the quality of his work as well as the strategic positioning of what he plans to do, both of which are essential factors in determining the sustainability of one’s research program. He has over 30 peer-reviewed publications including a number of excellent contributions in both neuroscience and endocrinology journals. Additionally, the citation trends of his manuscripts highlight that a number of these contributions are getting a lot of positive attention.

Burghardt has collaborated extensively with other researchers on a national and international level and has received awards for his research from the College of Psychiatric and Neurologic Pharmacists and the American Society of Clinical Psychopharmacology. His work investigating the mechanisms of insulin resistance using skeletal muscle samples from patients receiving antipsychotics is described as innovative and may lead to the development of new therapeutic targets.

The Department of Pharmacy Practice at the Wayne State University Eugene Applebaum College of Pharmacy and Health Sciences is a leader in integrating education, research and practice by driving collaboration and innovation within our diverse urban community and regional health care environments.