Professor of Pharmacy Practice Mary Beth O'Connell started her health care journey right here at Wayne State University, earning a degree in pharmacy in 1979 when it was still a bachelor-level program. She was among the first residents at Harper Hospital in 1980, and then in 1982 went on to earn her PharmD at the University of Minnesota. 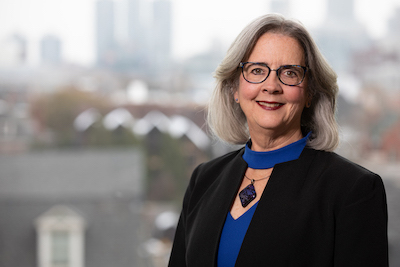 Upon graduation, O'Connell returned to Michigan for an assistant professor position at Ferris State University, then it was back to Minneapolis for a Kinetics, Nephrology and Transplant fellowship through the Drug Evaluation Unit at Hennepin County Medical Center the following year.

She became a University of Minnesota assistant professor in 1984, and an associate professor with tenure in 1991. O'Connell held that same title when she returned to the WSU Eugene Applebaum College of Pharmacy and Health Sciences in 2002, this time to stand at the front of the classroom. She was named professor with tenure in 2017, earning accolades along the way from the college the pharmacy profession.

O’Connell’s research and practice passions are geriatrics, women’s health, and scholarship of teaching and learning. She was a pioneer in creating pharmacy roles in ambulatory care, being one of the first pharmacists on an interdisciplinary geriatric ambulatory care team. She and her pharmacy resident created the pharmacist roles in the Detroit Medical Center geriatric clinics. As the only pharmacist on the NIH Office of Research on Women’s Health Advisory Board, O’Connell added the pharmacy perspective, talents, and resources to conversations and projects.

In addition to helping students achieve their career goals, researching best practices in teaching and providing patient care, one of O'Connell's most satisfying accomplishments has been serving as a student organization advisor both in Minnesota, where she was named Outstanding Advisor of the Year at the national level by Kappa Epsilon, and in Detroit, where she earned Advisor of the Year honors from National Lambda Kappa Sigma in 2018.

O'Connell has held numerous leadership committee and officer positions in professional organizations through the years, including but not limited to being named president of the American College of Clinical Pharmacy in 2002. This year, she was presented with the Fred W. Arnold Public Relations Award from the Michigan Pharmacists Association for outstanding achievement and dedication to the pharmacy profession through community education and awareness. The year before that, the American College of Clinical Pharmacy honored O’Connell with its ACCP Education Award, which recognizes members who have made substantial and outstanding contributions to clinical pharmacy education.

“Dr. O’Connell has been a dedicated educator at many levels within the Doctor of Pharmacy program,” said Department of Pharmacy Practice Chair and Associate Clinical Professor Lynette Moser at the time. “She embraces opportunities to mentor students through organizations, directed studies and challenging situations, and has made significant contributions to our program.”

Indeed, O'Connell aims to go the extra mile in everything she does, from teaching, mentoring and research to leading and making a difference. "Everyone needs vitamin O for organization," O'Connell said. "I’ve found I can never give more than I receive. Involvement in pharmacy, medical and health care organizations throughout your career — from student to retirement — is essential to improving patient outcomes and health care practice, policy, education and research."