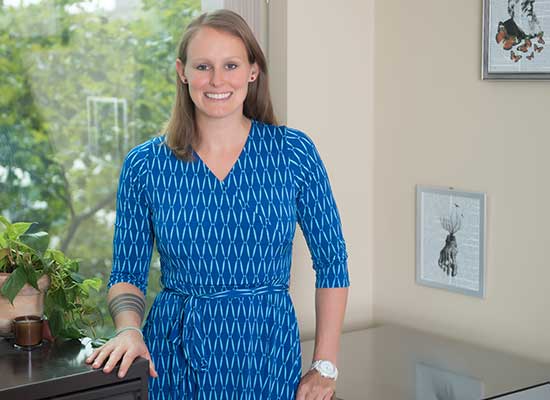 The National Institute of Mental Health of the National Institutes of Health has issued a five-year, $4 million grant to researchers at Wayne State University and Boston University to explore the therapeutic benefits of the drug allopregnanolone as a new approach to treating post-traumatic stress disorder (PTSD). Associate Professor of Pharmacy Practice Christine Rabinak, an expert in the biomarkers of development, maintenance and treatment of PTSD, is a co-investigator on the grant.

Rabinak has conducted similar, NIH-funded research in PTSD and is experienced in trials studying pharmacological targets to enhance the learning that occurs during exposure-based therapy. She leads the Translational Neuropsychopharmacology Lab in the Eugene Applebaum College of Pharmacy and Health Sciences.

“Current pharmacological treatments for PTSD are generally ineffective, and current behavioral treatments are generally only partially effective,” Rabinak said. “If this study is successful, it offers a much-needed approach to alleviate PTSD symptoms and target the underlying brain mechanism that contributes to PTSD pathology.”

The project, “Facilitation of Extinction Retention and Reconsolidation Blockade by IV Allopregnanolone in PTSD,” is a first step in drug discovery. The scientists anticipate that the results will lead to a clinical trial for PTSD. Allopregnanolone, also known as brexanolone, is a medication and a neurosteroid that acts on the brain. It is sold under the brand name Zulresso and used to treat postpartum depression.

Women are twice as likely to have PTSD as men, and there currently are no medications specifically geared toward women. The study will recruit both men and women, with women being tested during various points in the menstrual cycle to consider hormonal status and influence. Boston and Detroit will recruit an equal number of participants. The participants in Detroit will be individuals with urban trauma, which leads to higher rates of PTSD.

Ultimately, the team’s goal is to improve the lives of those with PTSD, especially women who may be more vulnerable due to fluctuating hormones.