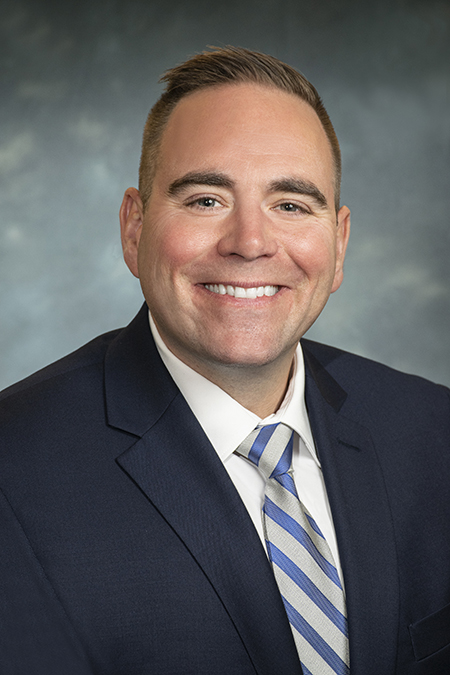 The National Board of Certification and Recertification for Nurse Anesthetists (NBCRNA) has named Dr. Christopher Gill, PhD, MBA, CRNA, as its new chief credentialing officer following a nationwide search for this position. Gill is an assistant clinical professor of nurse anesthesia in the Wayne State University Eugene Applebaum College of Pharmacy and Health Sciences. Among other academic credentials, he earned his master of science in anesthesia from Wayne State in 2013.

"We are excited to have Chris join NBCRNA and serve as the new leader of the organization's initial, continued, and subspecialty certification programs," said NBCRNA Chief Executive Officer John Preston. "We selected Chris based on his outstanding qualifications, his vision for board certification, his impressive work with the NBCRNA as a volunteer, and his commitment to patient safety and lifelong learning. We believe Chris has the leadership expertise and the passion to lead the NBCRNA's credentialing programs into the future."

Gill has had progressive leadership experience in the profession, including a two-year term as an Emerging Leader Fellow on the NBCRNA Board of Directors. Prior to joining the NBCRNA, he served as a Regional Director for the New England and Northwell territories at North American Partners in Anesthesia. He has also served as Chief CRNA and Clinical Coordinator prior to becoming a Regional Director.

A well-respected leader in nurse anesthesia, Gill has been extensively involved in credentialing research. He has presented nationally on certification-related topics and authored numerous scientific articles.

"I am honored to be selected to lead the credentialing functions of this extraordinary organization and to contribute to the continued evolution of continuing certification for nurse anesthetists," Gill said. "I look forward to working with the NBCRNA staff, board of directors, NBCRNA committees, and the CRNA community to enhance the public’s value of initial and continued board certification for the CRNA profession."