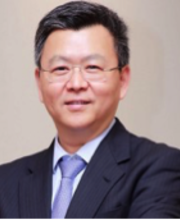 Dr. Zhongcong Xie, MD, PhD, FAS, was appointed to the Wayne State University Alumni Association (WSUAA) board. A pharmaceutical sciences graduate, Dr. Xie is the Henry Knowles Beecher Professor of Anesthesia at Harvard University Medical School, as well as director of the Geriatric Anesthesia Research Unit and attending anesthesiologist at Massachusetts General Hospital. His board term officially begins Oct. 1, 2019, and continues through 2021.

“We are fortunate to have Dr. Xie’s advocacy and service to the alumni board on behalf of the Eugene Applebaum College of Pharmacy and Health Sciences,” said Interim Dean Catherine Lysack.

An internationally recognized expert on the causes of memory problems following anesthesia and their relationship to Alzheimer’s disease, Dr. Xie has made significant contributions to anesthesia and anesthesia neurotoxicity research. With more than $2.5 million in funding, research in Dr. Xie’s laboratory focuses on determining the neuropathogenesis of Alzheimer’s disease, as well as postoperative cognitive dysfunction and postoperative delirium, a deficit of learning, memory and attention following anesthesia and surgery. He assesses the potential neurotoxicity of anesthesia, surgery, and other perioperative factors in vitro and in vivo, investigating their effects with cellular, molecular and behavioral approaches.

Dr. Xie has been a physician-scientist at Massachusetts General Hospital (MGH) and Harvard Medical School since 2000. He graduated from Xuzhou Medical University in China and earned his PhD from Wayne State in 1994, where he was a member of the Rho Chi Honor Society. He was a postdoctoral fellow in Harvard Medical School before joining the anesthesia residency program at MGH in 1997. He is frequently invited to speak at universities, hospitals and institutes in the U.S, China and Europe.

In addition to his research, Dr. Xie provides anesthesia care for patients who undergo complicated surgeries, such as tracheal resection and reconstruction, lung resection, esophagus resection and lung transplantation. He is active in teaching medical students, residents, and clinical and research fellows in both clinical settings and in the laboratory. He is also involved in patient education and community service.

Central and city governments in China have frequently recognized Dr. Xie. He has received honors including the Outstanding Mentorship Award from the International Chinese Academy of Anesthesiology, the first Beijing government High-Caliber Talent from Overseas award, China Yangzi River Scholar as selected by the Chinese government, and the Shanghai and China governments’ Global Expert Programs.

“We believe that Dr. Xie’s professional background, leadership achievements and commitment to Wayne State will serve the future of the board and the university well,” said WSUAA board President Frank Jeney ’05, ’15 in a letter announcing the appointment.

Over the years, Dr. Xie has maintained close ties with the pharmaceutical sciences faculty at Wayne State. Professor Randall Commissaris was Xie’s PhD advisor and initiated his nomination to the alumni board.

“Dr. Xie is renowned in his field and brings an exemplary record of professional service to the board. We are grateful for his commitment to the department and the university as a whole,” Commissaris said.

As a member of the alumni board, Dr. Xie will help engage fellow alumni in university programs and events; participate in meetings, committees and task forces; and serve as a knowledgeable ambassador for Wayne State and the alumni association at large.

Dr. Xie will return to the Eugene Applebaum College of Pharmacy and Health Sciences to deliver a lecture as part of the Department of Pharmaceutical Sciences Seminar Series. His presentation, “Anesthesia and Alzheimer’s Disease Neuropathogenesis,” takes place Wednesday, Oct. 2, at noon in the WSU Applebaum Building, Room 3015 (259 Mack Ave., Detroit).

For more information about the seminar, contact Professor Randall Commissaris at 313-577-0813 or aa5363@wayne.edu.