If you missed the surprise retirement celebration held for Dr. Peter Frade on Wednesday, Jan. 12, you can watch it here. 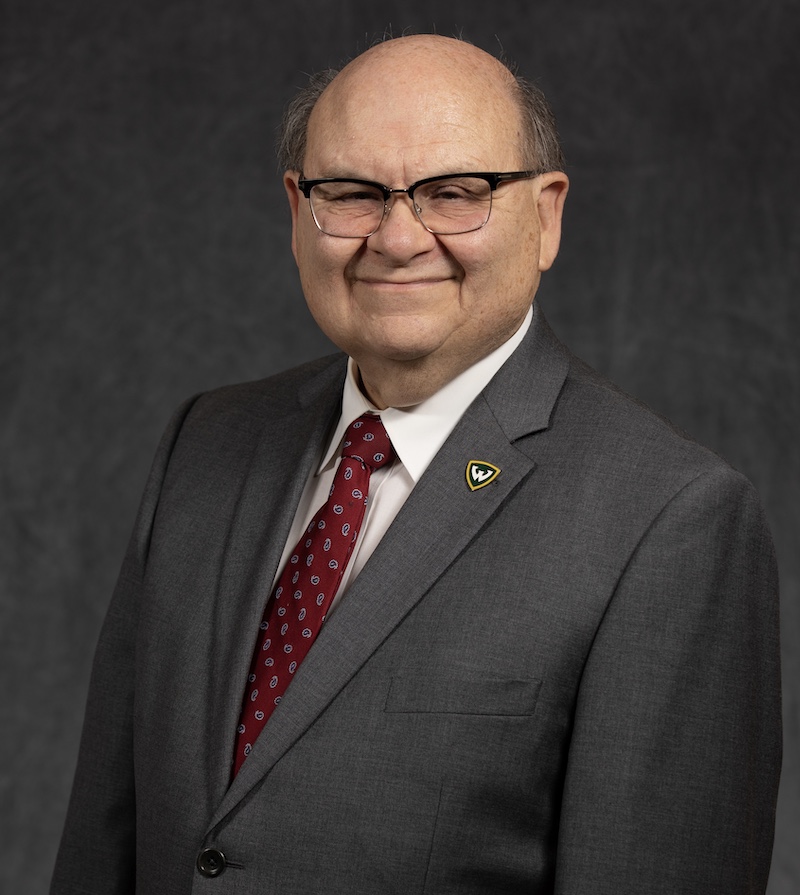 Peter Frade is a Wayne State Warrior through and through. A three-time alumnus with a quarter-century of professional service to the Eugene Applebaum College of Pharmacy and Health Sciences, Dr. Frade is well known across campus for his optimism, enthusiasm, kindness and compassion. He will retire on Jan. 15, 2022, leaving a meaningful legacy and having achieved the title professor emeritus.

Upon Frade’s retirement, Associate Clinical Professor of Physical Therapy Sara Maher will step up as interim associate dean for health sciences. (Get to know her here.)

“I met Peter at a meeting during my first week on the job as the new director of the Physical Therapy program, back in 2014. I didn't know a soul in the room,” Maher remembered. “I looked up to see a friendly face with a sparkling smile. After introductions were over, Dr. Frade patted me on the arm and said, ‘Welcome to the Applebaum family.’ From that moment on, he took me under his wing and helped me navigate being a leader at WSU.”

A lifelong Detroiter and graduate of Cass Tech High School, Frade earned bachelor’s (1968), master’s (1971) and doctoral (1978) degrees in chemistry from WSU’s College of Liberal Arts and Sciences. He took his experience to Henry Ford Hospital, where he worked as a chemist and then as a toxicologist in pharmacology and pathology from 1968 to 1996. 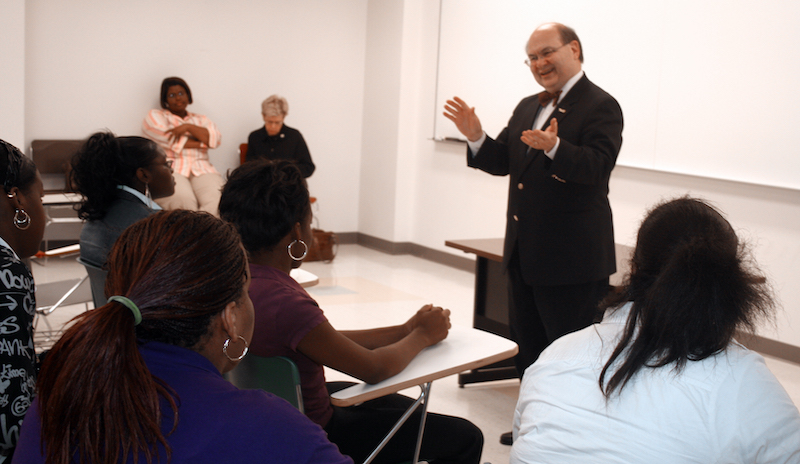 From that strong clinical base, in 1992 Frade joined WSU Applebaum – then known as the College of Pharmacy and Allied Health Professions – as an adjunct associate professor of mortuary science. He quickly moved up the academic ranks within the college, where he was promoted to full-time associate professor (1996), Pathologists’ Assistant program director (2001-16), Mortuary Science program director (2003-09), chair of the Department of Applied Health Sciences (2003-16), and finally associate dean for health sciences (2017-present).

During his more than 25 more years at WSU Applebaum, Frade has made lasting contributions in teaching, service and administrative leadership. As an educator and chemist, he developed and taught nearly 30 courses, not only in applied health sciences but also in pharmacy and pharmaceutical sciences. Eight of those were distance education courses – a precursor to the virtual learning format we are familiar with today. He mentored countless students, served as an interdisciplinary advisor for various projects and initiatives, and has secured over a dozen educational and research grants on their behalf.

Even after stepping into administrative positions, Frade prioritized teaching and mentorship, stepping up and teaching when needed, advocating on behalf of his faculty members, developing curricula, and offering a listening ear and wisdom for students and junior faculty alike.

A one-time student of Frade’s, Mark Evely rose to the role of colleague in his current position as chair of applied health sciences.

“Peter has been my teacher, mentor, supervisor and confidant. At Wayne State University, Peter has set the bar for work ethic, leadership and collegiality. He is someone you can always count on for encouragement and a kind word,” Evely said.

“Whenever we faced a challenging situation, Peter would say ‘keep your sunny side up,’” Evely added. “Peter's sunny side is ever-present.”

Frade’s dedication to student learning is rivaled only by his commitment to service. A much sought-after consultant and advisor, he has served on the American Institute of Chemists’ Ethics, Publication and Editorial Review committees; as the Michigan Institute of Chemists acting treasurer and Student Awards Committee chair; and he was appointed by Wayne State President M. Roy Wilson to the university’s 2018 Sesquicentennial Honorary Committee. He also has lent his expertise and energy to the Wayne State University Alumni Association Board and a partnership among the Detroit Police Department and Wayne State to lower crime rates in Midtown, as well as a multitude of executive-level WSU Applebaum committees and strategies, and he is the designated university expert on clinical toxicology.

Mortuary science alumnus Robert Vandenbergh ’69 – an emeritus member of the WSU Applebaum Board of Visitors who continues to support and advocate for the college ­– said, “Dr. Peter Frade defines the word dedication. I have never met a person who is more dedicated to his university, his students or his profession. Irreplaceable comes to my mind when I think of Peter. He never gives less than 100 percent.”

Frade’s enthusiasm for Wayne State is demonstrated in his personal giving as well. He and his wife Karen (also a three-time Wayne State graduate) have made significant philanthropic commitments to their alma mater. At WSU Applebaum, they established the Karen L. and Peter D. Frade Endowed Scholarship for pathologists’ assistant students and the Karen L. and Peter D. Frade Annual Scholarship in Health Care Sciences.

Hassan Abdallah, a 2019 graduate of WSU Applebaum's Occupational Therapy program, was a beneficiary of the latter scholarship during his student years.

“The Frades are selfless philanthropists whose greatest joy is helping those who need them most,” Abdallah said. “Without their generous scholarship, I do not know how I would have made it through my rigorous and expensive program.”

As part of the annual WSU Applebaum Donors & Scholars event, Abdallah had the chance to forge a personal connection with Peter and Karen Frade.

“Meeting the Frades and earning their confidence was a career and personal highlight I will always hold dear to my heart. Till this day, I remember my conversations with the Frades word for word and cherish the time we spent getting to know each other. Their wisdom and kindness have left lasting marks that I can only hope to pass on to the clients, colleagues and students I encounter in my OT career,” he said.

Abdallah is in the process of establishing the Rise Children’s Center pediatric clinic, which will provide occupational therapy, applied behavior analysis and speech therapy to children in Southeast Michigan.

The Frades’ generosity expands across the entire university, earning them membership in the Anthony Wayne Society, the Cornerstone Society, the President’s Circle, the Old Main Society and Wayne Loyal. They were honored with the Inspire from Within Award in 2017.

Within his clinical profession, Frade also has built a record of significant accomplishments. He is an expert in forensic investigative analysis, focusing on forensic entomology and arachnology, analysis of drug degradation products by microorganisms in ante- and postmortem states, postmortem drug analysis in embalmed cadaver tissue, novel instrumental strategies in forensic chemistry and toxicology, and forensic applications of hyphenated analytical technology. He is on the editorial board of several peer-reviewed journals in forensics and chemistry. 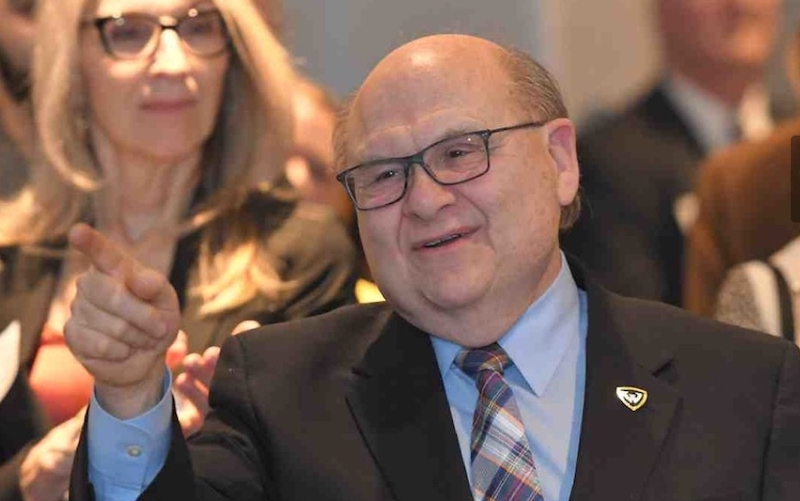 “Peter Frade has shaped the culture of our college, and we are better for it,” Evely said. “While he is enjoying his well-deserved retirement, his legacy will remain in our college through all of us who had the privilege of knowing and working with him.”

And, in a sentiment echoed by many at the college and across Wayne State, Maher said, “Dr. Peter Frade is indeed a Warrior for life.”