WSU Applebaum pharmacy alumnus Rony Foumia ’99 of Commerce Township, Michigan, has been named 2021 Pharmacist of the Year by the Michigan Society of Community Pharmacists. The award is presented annually to an MSCP member who displays professional excellence and/or exemplary service to the profession toward advancing patient care in the community setting. 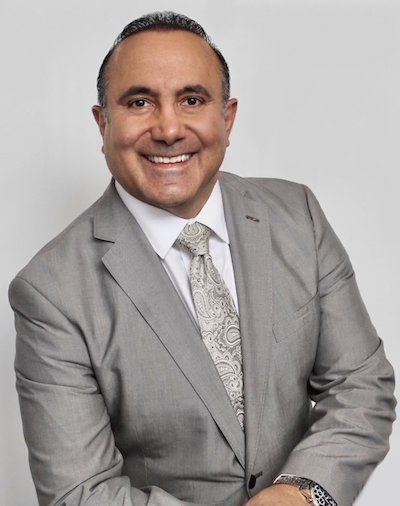 Foumia has been a licensed pharmacist in Michigan since 1999 after earning his bachelor’s from the Eugene Applebaum College of Pharmacy and Health Sciences. He started as an intern with Arbor Drugs in 1997 and practiced as a pharmacist for CVS from 1999 to 2007. He worked as a pharmacy district leader for CVS and Rite Aid, managing more than 200 pharmacy locations in Michigan between the two corporations. He also served as the director of long-term care and currently is the area director for continuity of care for Ascension Rx overseeing the Michigan market.

He was appointed by Gov. Rick Snyder in 2017 to the Pharmacy and Therapeutics Committee and reappointed by Gov. Gretchen Whitmer in 2019. He also serves as an executive board member on the Oakland County Pharmacists Association, executive board member for the Chaldean American Association for Health Professionals and as a representative on the Lakes Area Community Coalition. Several times a year, he serves as a guest teacher for the WSU Applebaum Doctor of Pharmacy program.

Foumia is passionate about helping the less fortunate and those in need, along with mentoring dozens of pharmacy students across the country. He is also actively involved in helping combat the opioid crisis by holding community events throughout Michigan. He was named the 2020 National Person of the Year by Dispensary of Hope, a charitable medication distributor that delivers critical medicine – free of cost – to people in need. Foumia’s compassion and commitment to servant leadership make him a worthy recipient of this distinguished award, along with his unwavering belief in the impact and importance of community pharmacy in advancing patient care.