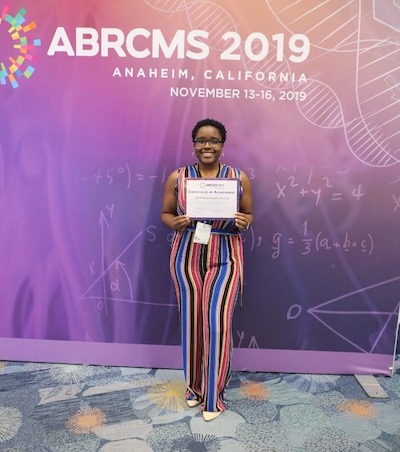 Back in January, then-freshman Sydni Alexis Elebra challenged herself to attend a national conference by year’s end. In November, she flew right by that goal, not only earning a travel award to make it to the Annual Biomedical Research Conference for Minority Students (ABRCMS) in Anaheim, CA, but also presenting her research there and winning an outstanding poster award. It was her first national presentation in her field.

Elebra is a Wayne State University chemistry major with a biochemistry minor and a REBUILDetroit Scholar, an NIH-funded program to increase the number of underrepresented undergraduate students on the path to become scientific researchers at University of Detroit Mercy and Wayne State. The program includes research-rich experiences, mentoring, accelerated graduate education at WSU, and more.

As part of the REBUILDetroit program, Elebra connected with Distinguished Professor of Pharmaceutical Sciences Anjan Kowluru last fall, when she interviewed him for the Research Methods course. She is interested in endocrine pharmacology (specifically, metabolic diseases including diabetes), while Kowluru has been researching the mechanisms underlying the pathogenesis of the disease for more than two decades. It was a solid match.

Elebra spent winter semester shadowing in Kowluru’s laboratory and became an independent student researcher there this summer. The lab is working to identify specific genes that must be regulated by glucose to induce insulin secretion, to identify novel drug targets to rectify these defects in diabetes, and to develop beta cells resistant to immune attack for use in transplantation for the treatment of Type 1 diabetes. 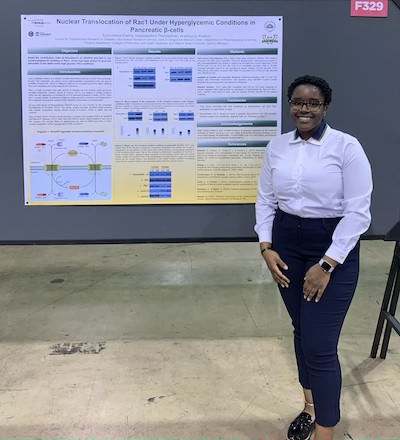 “Sydni is a quick learner. I was surprised to see her learn and master key experimental techniques requisite for the project in a short time. I was particularly impressed by her ability to read and understand important publications in the field and routinely discuss them with members of my laboratory,” Kowluru said. “It was clear to me right away that she was ready to embark on a project in a relatively independent fashion.”

Under the mentorship of Vijayalakshmi (Viji) Thamilselvan, Ph.D., a senior researcher in Kowluru’s lab at the John D. Dingell VA Medical Center, Elebra accrued and analyzed data in the area of nuclear G protein signaling in the islet beta-cell.

“Viji was a wonderful mentor, always there to offer encouragement when experiments didn’t go as planned, explain unfamiliar lingo, and guide me through the lab’s various procedures,” Elebra said.

She presented her findings in lab meetings, at two Wayne State conferences, and ultimately as the award-winning poster “Nuclear Translocation of Rac1 Under Hyperglycemic Conditions in Pancreatic β-cells,” co-authored with Thamilselvan and Kowluru, at the ABRCMS national conference in November.

Elebra is grateful for the opportunity to take the lead.

“Dr. Kowluru put his faith into an undergraduate freshman to take on a novel research project,” she said. “This level of trust and responsibility allowed me to grow as a researcher and gave me the courage to take on something larger than myself. The group’s immense support will continue to influence my love for research.”

ABRCMS was an invaluable learning experience for Elebra. She attended scientific and professional development sessions, taking in knowledge and perspectives on choosing a graduate school, communicating in the workplace, and networking with researchers and professionals in the biomedical realm.

“Sydni has accomplished things that are hard to expect from an undergraduate freshman ­­– and she did so relatively easily,” Kowluru said. “These accomplishments speak for her passion, motivation and commitment to conduct biomedical research.”

Elebra is on the E-board of Wayne State’s student chapter of the National Society of Black Engineers, is part of the Warrior Vision and Impact Program (Warrior VIP), and is a peer mentor in chemistry. She is the child of two Wayne State alumni, pharmacist Rogers ’96 and artist Charissa ’08.

She plans to pursue a doctorate in pharmaceutical sciences.