As soon as Ismail Syed learned that he received a faculty position at Harvard Medical School this spring, he phoned members of his family to share the good news. Near the top of his call list was Distinguished Professor of Pharmaceutical Sciences Anjaneyulu Kowluru, the man who’d served as his PhD program mentor at the Wayne State University Eugene Applebaum College of Pharmacy and Health Sciences a full decad 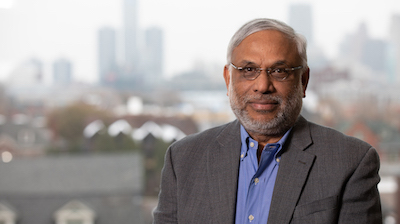 e ago. He wasn’t a relative, of course, but Syed says that Kowluru went beyond mere mentoring: “He was also a father figure.”

Syed is among the many researchers and scholars who have gone on to achieve great success after being guided by Kowluru.

“I’ve had the good fortune to mentor a lot of people at a lot of different levels — more than 90, from undergraduates to postdocs and from clinical investigators to junior faculty,” Kowluru said. “It makes my life more interesting.”

And that’s saying something, considering Kowluru’s own impressive career. The senior research career scientist at the John D. Dingell VA Medical Center in Detroit arrived at WSU in 1998, became a full professor with tenure in 2002, and just two years later was named a Charles H. Gershenson Distinguished Faculty Fellow, an honor established by the university to recognize and provide support for faculty whose continuing achievements and activities in scholarship, research or the arts are nationally distinguished.

Kowluru served as WSU Applebaum’s program director for research from 2004-11 and as its associate dean for external scientific affairs from 2011-17. In 2006, he was appointed to Wayne State’s Academy of Scholars, a prestigious collection of prominent academic experts and celebrated researchers, of which he served as president in 2018-19. He is an oft-invited speaker across the country and globe, has been named chair of a range of committees and membership organizations, and has been honored with numerous awards, including Wayne State’s Distinguished Graduate Faculty Award in 2015.

Through it all, he has worked diligently in his VA Medical Center lab researching the pathophysiology of diabetes. The lab is working to identify specific genes that must be regulated by glucose to induce insulin secretion, to identify novel drug targets to rectify these defects in diabetes, and to develop beta cells resistant to immune attack for use in transplantation for the treatment of Type 1 diabetes. He also has spent the past four decades earning numerous grants, including continuous support for over 30 years from the U.S. Department of Veterans Affairs Merit Award, and collaborating with colleagues near and far to publish more than 180 papers.

“Dr. Kowluru is the quintessential educator and researcher,” said Cathy Lysack, dean of the Eugene Applebaum College of Pharmacy and Health Sciences. “We are fortunate to have him as an industrious member of our faculty, and his students are fortunate to learn from one of the best.”

Harvard’s Syed agrees. “He’s a great teacher to begin with, and a really great scientist,” he said. “He encouraged me to go into academia and warned me that I’d need passion for research because it’s not a 9-to-5 job. You dedicate your life for the good of humanity.”

Kowluru says Syed’s potential to soar was undeniable. “He worked in my lab at the VA hospital for four years and then went on to a postdoc fellowship at Harvard with Dr. Barbara Kahn, a major name in the field of diabetes research,” Kowluru said. “Once I learned he’d received the very elite and competitive K Award from the NIH, I knew he would continue to succeed.” Also known as a Career Development Award, the K Award provides support for senior postdoctoral fellows or faculty-level candidates to bring them to the point where they are able to conduct their research independently and become competitive for major grants.

As word spread of Syed’s accomplishments, Lysack was among those to cheer: “This is a wonderful example of scientists trained at the college under excellent mentorship moving out into the academic world and having great impact.”

Another Kowluru mentee in that category is Abiy Mussa Mohammed, PhD ’13, who is on his way to Washington to begin work as a biologist with the EPA — his dream job, Kowluru recalls: “The day he joined my lab, he told me he wanted to work for either the FDA or the EPA. This is great news and another success story for our program.”

Kowluru says the foundation of a successful mentorship is unconditional support. He encourages hands-on training, interdisciplinary collaboration, project autonomy and co-authorship. “I help each person find their niche, then encourage them to run with it and contribute to the field,” he said, noting that publishing helps with data analysis skills and results in a huge sense of accomplishment.

He also makes time to meet with mentees one-on-one to ask, “Is there anything else you want me to do for you?”

It’s not all sunshine and roses though, Kowluru said: “I am really strict and I warn them that they’re probably not going to like me all the time, but that they’ve chosen this path so they’ll have to do the best they can with no shortcuts to make sure the final product is perfect.”

He leads by example, saying, “You have to have a passion for your research and be willing to work days, nights and weekends.”

When Assistant Professor Jiemei Wang joined the WSU Applebaum faculty in 2016, she asked Pharmaceutical Sciences Department Chair George Corcoran for advice on choosing a faculty mentor. “He told me Anjan would be great, so I approached him during our next department meeting and he immediately said yes,” she recalled. “I was so grateful and humbled — he treated me both as a valuable colleague and as one of his kids.”

That was intentional, as Kowluru says he uses the same skill set for parenting and mentoring. He raised two accomplished daughters with his wife Renu, a WSU professor herself who researches diabetic retinopathy, teaches retinal cell biology in the School of Medicine and was recently appointed to serve on the National Eye Advisory Council of the NIH. When she was named to the Academy of Scholars in 2011, they became the first-ever married couple in the group’s then 32-year history.

In addition to collaborating on parenthood, the Kowlurus have published 45 papers together and have been awarded several NIH grants. “It’s nice being married to someone in the same field who understands what I do,” he said. “And it was also helpful for our daughters to watch us work together and sometimes struggle to win grants and get papers published through the years.”

Indeed, teamwork is a key lesson Kowluru expects mentees to learn from him, saying that he’s grateful for the support of the college, his department and the VA Medical Center.

Kowluru also makes sure students know that mentoring is a pay-it-forward proposition. He speaks fondly of two professors who guided him along the way decades ago at Brussels Free University School of Medicine in Belgium and at the University of Wisconsin School of Medicine: “They are both still conducting high-caliber research, and I’m in touch with them on a regular basis to learn from them.”

Syed, meanwhile, is mentoring research assistants and “literally trying to replicate the experience Dr. Kowluru provided for me. Sometimes when I fail, I take a step back and think, ‘What would Dr. Kowluru do?’”

And Wang recalls her early years in the college as she guides her own PhD candidates: “Anjan showed me how to train students and encourage them to stay curious and really think critically.”

Kowluru says seeing his mentees successfully shepherd others is among his greatest accomplishments: “Mentoring is what I do. And as I tell each of them: You have to be the best at what you do.”