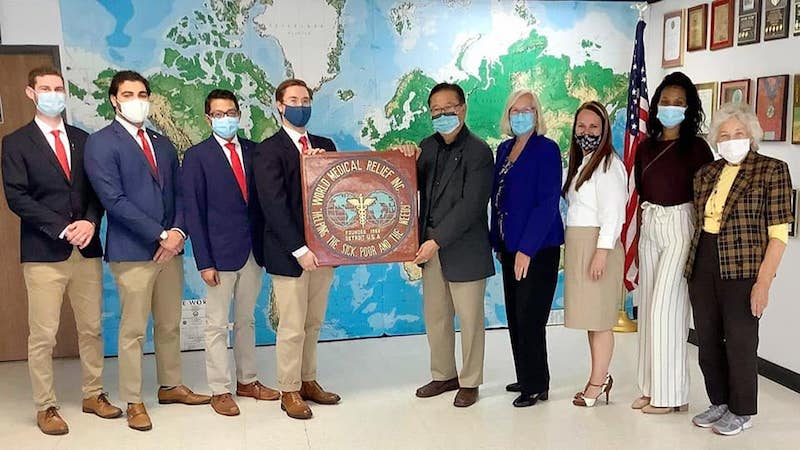 It comes as no surprise that when World Medical Relief was looking to fill an internship position at their international headquarters in Southfield, Michigan, the nonprofit intended to hire one person for the job. But then 10 future pharmacists showed up and made them an offer they couldn’t refuse.

Wayne State PharmD candidate Joseph Paul Pacis Javier was originally approached about the internship in early 2020, and as interested as he was to take on the challenge of creating a diabetes education program for metro Detroiters, Javier did not have 20 hours a week to spare. In addition to Eugene Applebaum College of Pharmacy and Health Sciences coursework, Javier holds leadership positions in several organizations, including Wayne State’s Mu Omicron Pi chapter of Kappa Psi Pharmaceutical Fraternity.

It was the teamwork within his fraternity that gave him an idea. “The 10 of us have a range of strengths and talents, which is why we’ve been so successful working together on Up to Us,” Javier said. In fact, team Mu Omicron Pi won Best Overall Campaign during last spring’s nationwide, campus-based challenge focused on building a sustainable economic and fiscal future. The brothers are currently engaged in the next round of the competition, with a focus on increasing voter turnout in November for a stronger democracy.

Javier rallied his brothers and they made an all-for-one-and-one-for-all presentation to World Medical Relief. “We proposed that we take on the internship as a fraternity to spread the work out among all 10 of us,” he said.

Throughout the summer, Kappa Psi worked with the humanitarian aid organization to develop the Pathways to Better Health educational program for underserved diabetes patients in metro Detroit, an extension of the organization’s Affordable Prescription Program that distributes insulin and other medications to local patients in need.

“The original vision called for a free clinic at the World Medical Relief headquarters on the border of Southfield and Detroit, but the pandemic meant we had to shift gears,” Javier said. Pathways to Better Health, made possible by a grant from Blue Cross Blue Shield, will launch online within the next few months, with plans to open the physical location next year.

“Similar to the DEW Clinic, it’s a way for underserved and low-income people who’ve been diagnosed with type 2 diabetes to learn more and gain control," Javier said. Participants complete six training modules on topics such as medications and equipment, proper diet and exercise routines, and living a full life with diabetes. The lessons also are printed in pamphlets and mailed to those without computer access. Additional services include insurance guidance and resources to point patients toward reliable sources of free or low-cost insulin and other supplies.

“Our first cohort will consist of around 40 to 50 patients. Once they go through the six-week program, we’ll evaluate and revise as needed while raising funds to set up the onsite clinic,” Javier said. “We’re also planning on a research component to gather data, which will help the program better serve our patients.”

Javier said he and four other core members of the Kappa Psi team (Daniel Frederick, Lucas Crum, Noah Trotter and Jacob Dudash) each have been putting in about eight hours a week since March, collaborating with World Medical Relief Head Pharmacist Ray Gibson, who is a 1960 Wayne State pharmacy graduate and was Kappa Psi chapter president that same year.

“My brothers and I are proud to have built a partnership with this great nonprofit organization to provide a lifesaving service to metro Detroiters,” Javier said. “Joining Kappa Psi is one of the best decisions of my life. Together, we can do so much.”