Happily ever after: Nemo and Stacey Niemiec secured more than degrees at WSU Applebaum

If you were to script a romantic comedy set within the Wayne State University Eugene Applebaum College of Pharmacy and Health Sciences, you might not choose a gross anatomy lab for your opening scene. But a roomful of cadavers is where it all began for Stacey Schepens Niemiec ’03, MOT ’05, PhD ’09 and Matthew “Nemo” Niemiec ’04, MPT ’06. 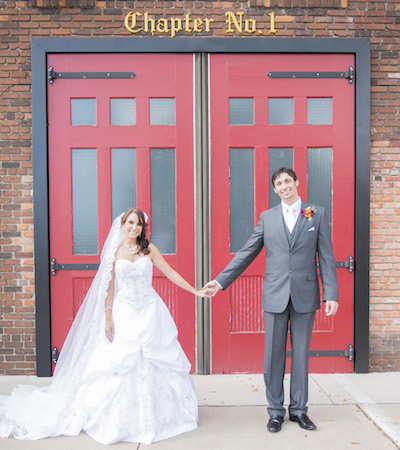 The year was 2003 and it was Nemo’s first week of his first semester in Wayne State’s Physical Therapy program, then a master’s degree. Stacey, meanwhile, was working toward her master’s in occupational therapy while serving as the lab instructor in Nemo’s anatomy class.

“Stacey doesn’t believe me but I still remember seeing her on the first day of class,” Nemo said. “I’m not saying it was love at first sight, but I remember the blue of her scrubs and the smell of formaldehyde in the air.”

Respectful of the student-teacher dynamic, Nemo waited until after the final exam to ask Stacey out, doing so by passing her a note “like I was a sixth grader instead of a master’s student.”

It wasn’t because of his technique but rather a technicality that Stacey turned him down: She already had a boyfriend.

And so, in true rom-com form, Nemo and Stacey became the best of friends. They bonded and were quickly inseparable, despite the fact that she had to crane her neck to chat with him — Nemo towered over her and almost everyone else at 6 foot, 7 inches. “I called her Smalls and she called me Talls,” he said. They made each other laugh. And eventually, when they were both single at the same time, they started dating. 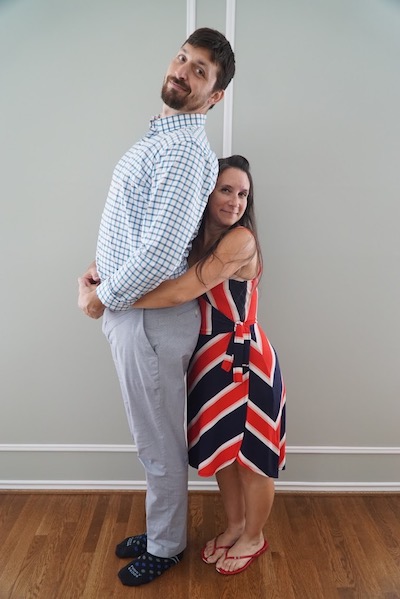 Smalls became Mrs. Talls in 2013, and the pair is currently well on their way to living happily ever after just north of Hollywood. Nemo recently earned his doctorate in physical therapy and Stacey recently was promoted to Associate Professor of Research at the University of Southern California Chan Division of Occupational Science and Occupational Therapy. But let’s not fast-forward through their “once upon a time.”

The Niemiecs each grew up in metro Detroit and attended Catholic high schools, but while Stacey knew early on that she was interested in occupational therapy and research, Nemo felt destined to be a writer like his journalist father.

Nemo was studying communication and English at the University of Michigan when his advisor pointed out that he was good at science and math as well, and suggested he consider other career paths. “I had been focused on the degree instead of the job,” Nemo said. When he reflected on all the occupations he’d seen in action, he recalled the physical therapy appointments he’d gone to throughout his childhood.

“As I got ridiculously tall and had growing pains and sports injuries, I gained a really strong appreciation for what PTs did to help me,” Nemo said. So he changed his major to movement science. “There are things you’re good at and things that drive you. If you only focus on one part of that equation, you’ll either have an uphill battle or will burn out. With physical therapy, I was fortunate to find something that came easily to me that I really enjoyed.”

At WSU, both Nemo and Stacey happened to be enrolled in programs that were in the process of transitioning. The extra time Stacey spent pursuing first a bachelor’s and then a master’s degree in the Occupational Therapy program was ideal for her: “During my master’s program, I was able to learn more about research and understand how I could contribute to the field in ways that I’m not sure I would have understood otherwise,” she said. She took her first research class with Professor Cathy Lysack, who now serves as WSU Applebaum’s interim dean. “When Dr. Lysack asked if any of us thought we might go into research instead of working in a clinic, nobody raised their hand,” Stacey said. “That got me thinking.”

Stacey went on to make the most of her 10 years at one of the nation’s preeminent public urban research institutions, embracing a number of WSU opportunities such as working in Dr. Allon Goldberg’s Physical Therapy Mobility Research Lab and completing a National Institutes of Health predoctoral fellowship in aging and urban health.

PT Program Director and Assistant Clinical Professor Kristina Reid recalls seeing Nemo hanging around Goldberg’s lab while Stacey worked. “Back then, it was unique to have an OT assisting in a PT lab,” Reid said. “Nemo was also in the building a lot because he was active on his class board and often led study groups. He was great at it, and helped his classmates manage the stress of graduate school with his fun and lighthearted approach.”

In fact, Nemo orchestrated a legendary graduation stunt during the first and only year that students were put in charge of the ceremony. He interviewed faculty members for a video but then edited it in an unexpected way. “When he filmed me, he asked what I enjoyed most about pediatric PT,” Reid said. “Then he edited out his original question and replaced it with something like, ‘Why do you spend so much time on playgrounds?’ And you can imagine how that made my answer sound! I thought it was hilarious but there were a few faculty members who were not amused.”

Regardless of those grumbles, Reid knew a sense of humor like that would make Nemo popular with patients: “I could tell he’d be a great PT because he clearly cared about people, and being patient-focused is so central to a therapist’s job.”

Meanwhile, OT Program Director and Assistant Professor Doreen Head remembers being incredibly impressed by Stacey’s drive. “She just hit the ground running,” Head said. “She was very smart and very driven by research focused on technology and interventions. Not many students are interested in the mental health side of OT the way she was. She took advantage of everything that was available to her, including resources through Wayne State’s Institute of Gerontology.”

Stacey’s NIH fellowship continued as she pursued her PhD in instructional technology, which she earned from Wayne State’s College of Education in 2009. It all was solid groundwork for the research she’s doing now in California, which focuses on the promotion of health and wellness in older adults.

Head notes that although the traditional route for OT researchers is to spend time in the clinic after graduation before heading into the lab, Stacey’s choice to jump right into research was right for her. And of course Stacey agrees, adding that she works closely with clinicians to keep her research grounded in the real world: “I recognize that without collaborators and co-investigators who work with clients, I wouldn’t be able to develop practical interventions.”

“It was a good fit but I was terrified to move across the country,” Stacey said. “I was a homebody and never thought I’d leave the state, let alone move so far from it.” But she had Nemo by her side, and the two born-and-bred Michiganders now consider themselves Californians, saying, “All it took was one winter away.”

LA traffic is terrible, of course, but that hasn’t affected the Niemiecs lately — both have been working from home since the novel coronavirus took hold of the U.S. in March. “I’ve been teaching remotely and doing remote-based research,” Stacey said. And when the PT clinic where Nemo had been working closed at the start of the pandemic, it freed him up to manage the transition of Stacey’s primary randomized controlled trial from in-person to virtual.

Their collaboration is nothing new — through the years, Nemo has worked with Stacey on grant writing, research development, consultation and co-investigation. “Nemo has been amazing in getting me through these really strange times of remote interactions,” Stacey said. “He’s helped train my incoming RAs, deliver intervention, record training videos for RCT participants and more. And once all the data come in, he’s going to be able to add his clinical perspective to the interpretation of findings.”

Her former program director loves to hear it. “Both occupational therapy and physical therapy operate on a human, personal level,” Head said. “We look at the whole person and really get to know each other. So it’s never a surprise when OT and PT students connect.”

Stacey’s current study explores how integrating activity into the daily routine of underactive older adults affects their wellness and outlook. The project involves smartphones, an app and an activity tracker — all of which needed to be managed remotely once the pandemic separated her from participants.

“We used to have group sessions at senior living centers but now we’re doing Zoom calls with shared screens to help them download the app or walk them through taping the activity tracker to their legs,” Stacey said. “Where I’m more tightly wound, Nemo wins everyone over. Patients love him.”

Prior to March, she had 39 participants. Now she’s met her goal of 100 — in part because Nemo excels at convincing folks to join the study during cold calls.

Stacey says her hands-on experience at Wayne State was crucial to the work she’s doing today. “I’m proud of my WSU origins and promote the university every time I introduce myself,” she said, adding that Wayne State’s cultural diversity broadened her worldview. “People appreciate the unique perspective I bring from Detroit to USC and to research in general.”

Nemo also has fond memories of his time at Wayne State — and not just because he met the love of his life there. “When I went back for my transitional doctorate from Western University of Health Sciences, it was really just a review. I realized I had already learned everything I needed at WSU.”

He credits WSU Applebaum instructors, saying, “They were by and large so good. I knew I was getting a quality education. And after three years, I felt as prepared as I possibly could be to jump into the world and make people’s lives better.”

That’s music to Lysack’s ears. “Stacey and Nemo are both wonderful representatives of our programs,” she said. “We are always so happy to catch up with alumni who are doing great things.”

And the fact that the Niemiecs are doing great things together? It’s icing on the wedding cake.