Sharon Gee-Mascarello may be done in the classroom but she’s far from finished with teaching. 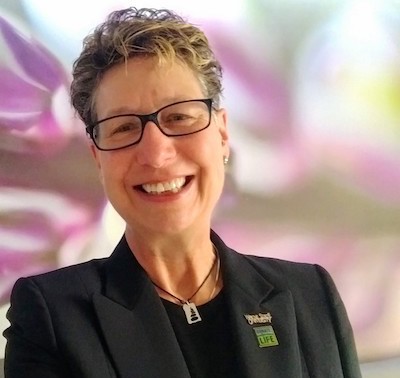 When the door closes on her 24 years as adjunct faculty in the Eugene Applebaum College of Pharmacy and Health Science’s Mortuary Science program, it will swing wide open for related pursuits, including mentoring, guest speaking and, most urgently, editing a sixth edition of the embalming textbook she’s been using in her courses all these years.

“As much as I will miss my Wayne State students, I appreciate being able to devote my full and utter focus to an enormous project that will help me go beyond the classroom and into the global world of embalming instruction,” Gee-Mascarello said. “Updating Embalming: History, Theory and Practice will be the ultimate feather in my cap — I’m still pinching myself that I have this opportunity.”

The opportunity is one that came about in part because of her position at WSU. She met Robert G. Mayer, the book’s primary author, years ago when he came to campus as a guest speaker. After they struck up a professional relationship that evolved into friendship, Mayer brought her on as a contributor and editorial consultant during the fourth and fifth editions of the embalming book that’s used in every mortuary science program in the U.S. and abroad. When he retired, Gee-Mascarello was selected by the American Board of Funeral Service Education, which owns the book, to take over as editor. “They’re big shoes to fill,” she said. “I prefer to call myself a steward of Bob’s legacy.”

She’s already spent months researching and planning updates to the 785-page textbook, with new sections covering topics such as the opioid epidemic and, of course, COVID-19. The biggest challenge will be overhauling the photography. The book currently contains 400 photos, all in black and white except for a center section.

“It’s very difficult to show details like discoloration in black and white,” Gee-Mascarello said, adding that the book’s text-heavy format isn’t ideal for today’s visual learners either. So she’ll be changing the way information is presented, arranging sequential pictures with short captions “to give students something exciting to look at before they read about it, to layer the process of learning.”

This student-centered focus has been Gee-Mascarello’s approach to teaching at WSU Applebaum over the past two dozen years. “At the beginning of each semester, I tell my class: ‘This is not about me, it’s about you. Everything I know, I’m going to give to you,’” she said, noting that she worked in the funeral service profession for 10 years before she joined WSU and never stopped, working and teaching simultaneously for the next 24 years. She retired from her day-to-day funeral service position in 2010 but continues to freelance and consult, and currently serves as president of the Michigan Embalmers Society and vice president of the American Society of Embalmers. 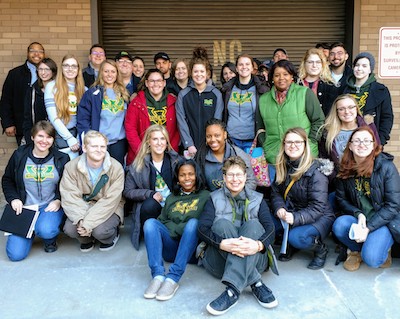 “Whenever I was lecturing and said, ‘The other day at work … ’ my students always perked up. Those stories made lectures so tangible, and I told them what I did right and what I did wrong so they could learn from my mistakes,” Gee-Mascarello said. “I never liked instructors who had to be smarter than their students. The point is to shift what we have to them so they can take our knowledge and run with it. That’s how to elevate the whole profession.”

That perspective is one reason she’s been among the college’s most popular instructors, as evidenced by the handful of part-time faculty awards she’s earned over the years and the multitude of students who continue to reach out to her for professional advice long after graduation.

“I always looked forward to her lectures on Thursday mornings because she told stories that made it so real,” said funeral director Roger Husband, who earned his mortuary science degree at Wayne State in 1999 and went from student to colleague when he became part-time faculty in 2001. “I turned in my final with tears in my eyes because I hated to leave her class. I never thought I’d end up as her lab assistant!”

The two joined forces so effectively that, perhaps due in part to Husband’s name, students often thought they were married. “We finished each other’s sentences and had had a magical synergy for 18 years,” Gee-Mascarello said. “After I lectured, students would head into our lab to do everything we’d just talked about. It resulted in so many aha moments!”

Husband is happy to see Gee-Mascarello turning her focus to the textbook they built their lessons around, saying, “When you’re passionate about teaching, you never retire. Her influence will continue to play a major role, not just through the book but through the light that shines in our graduates.”

Gee-Mascarello jokes that over the course of her teaching career, “approximately 1,000 students have endured my embalming courses.” But those students would use a different verb than endured. Enjoyed is the word that most frequently comes up when mortuary students and alumni reflect on their time in the classroom with Gee-Mascarello. 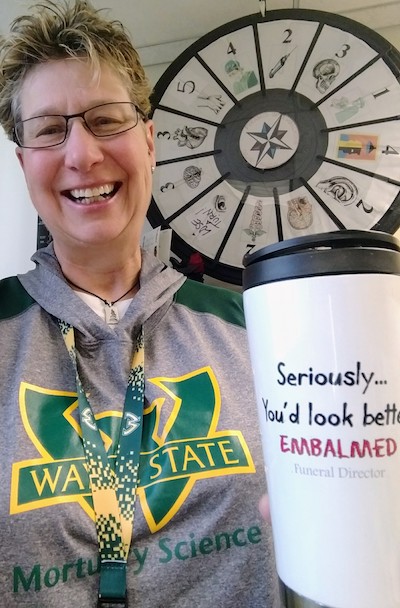 “Sharon is passionate about embalming — the science of it but also the artistry as well as the emotional and psychological parts of it,” said Kimberly Varela, who graduated in 2013 and now serves as a funeral director and embalmer at Husband Family Funeral Home in Westland, founded by Roger Husband in 2010. “She exudes that passion and motivates students to serve the deceased and their families with a high degree of not just professionalism but also empathy.”

Gee-Mascarello confirms that the WSU psychology degree she earned in 1987 has paired beautifully with the mortuary science certificate she earned the year prior because “human nature and knowing why we make the decisions we do is extremely important when you’re in a people profession.”

A lifetime member of the Anthony Wayne Society — she made a significant gift in memory of her father — Gee-Mascarello says WSU will always be home. “I bleed green-and-gold and will never stop wearing Wayne State gear. I have shirts from every single year,” she said, adding, “I was a Tartar but now I’m Warrior Strong.”

At the end of this semester, she’ll pack up her spirit wear and take it north to Gladwin, where she and her wife, Cherie, will spend their retirement with their dogs, cat and the 15 varieties of birds that frequent their multiple outdoor feeders. Cherie retired as a detective with the St. Clair Shores Police Department earlier this year, and the couple is looking forward to frequent visits from their two kids and four grandchildren. “They can fish off the pier, go on pontoon rides, fly on the ultimate tire swing — it’s the perfect place to be,” Gee-Mascarello said, adding that she suspects Gladwin earned its name because “everyone is glad to be here and everyone wins.”

Their slice of paradise comes complete with a she-shed, where Gee-Mascarello will continue working on the embalming textbook ahead of its 2022 publication date. 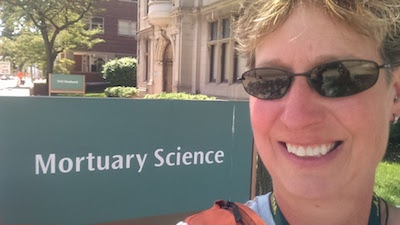 “Sharon has been the mainstay of embalming education at Wayne State University for nearly a quarter century,” said Mortuary Science Program Director and Applied Health Sciences Chair Mark T. Evely. “During her time at Wayne State, she has been a teacher, counselor, confidant and a representative to the funeral service community. She has distinguished herself as a teacher and a national presenter on the science of embalming. Sharon’s legacy will be present for decades to come in the students that she taught.”

Gee-Mascarello notes with a smile that Evely, a 2004 Wayne State graduate, was once her student himself, as was the program director before him. And a number of her students have returned over the years to assume teaching positions. It’s a legacy that fills her with joy. “Teaching is the most amazing vocation and so is being a funeral director,” she said. “It’s been such a pleasure and a privilege to do both.”