This story by Don Gardner was originally published in the Macomb Daily. 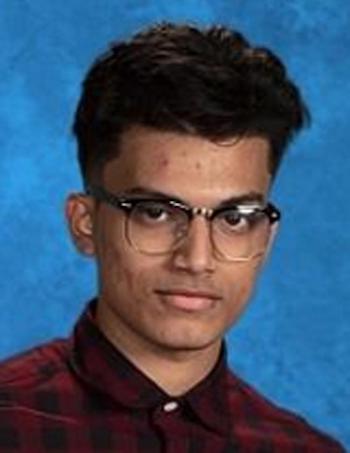 Mohammed Shadi admits his parents gave up a pretty good life in Bangladesh to bring him to the United States when he was two years old.

Dad, Mohammed, and mom, Marjana, gave up a successful business importing and exporting garments when they decided to start over 16 years ago by moving to the United States to ensure a better life and more opportunities for their young son.

The younger Mohammed, now a senior at Warren Mott High School, is working to make their dream a reality. Since his junior year, he has been dual enrolled at the high school and Macomb Community College.

By the time he enters Wayne State University in the fall, Shadi will have accumulated 38 hours of college credits that will all transfer to WSU. That will include a pretty hefty load of classes this summer. He will enter Wayne State, where he plans to study physical therapy, as a sophomore. He earned a Green Award scholarship from Wayne State as well as a RaiseMe scholarship, which combined will pay for his tuition.

"I've always had a passion for health care and business, too. I want to pursue both, and I want to open my own practice some day in home health, or urgent care or hospice," Shadi said.

Mohammed Shadi is The Macomb Daily Student of the Week.

He counts among his role models Mohammed Qazi, another United States immigrant who started with nothing and is now the CEO of one of the largest nursing home companies in Michigan. Qazi founded Ciena Healthcare, based in Southfield, in 1998. The firm now has nearly 4,000 licensed beds and 36 nursing communities, comprising the largest privately-owned skilled nursing and rehabilitation centers business in Michigan.

"He worked his way up, opening a company that grew over time, and that's what I want to do," Shadi said. "I want to start small and grow into other forms of health care. I want to help everyone, and the more I can grow the business, the more I can be a social entrepreneur (with donations and charity works)."

Shadi said he doesn't really see a shortage in physical therapists in general, but he does she a need when it comes to helping the elderly.

"I do feel like the older people get, they get pushed away. Society feels like they're not important," he said. "I'm more passionate about business, but helped me realize I could use my interest in health care to really help people and make a difference. Then I'd like to expand as much as possible, including helping people back in Bangladesh."

Shadi, who carries a 3.4 grade point average in high school, credits Wayne State's C2 pipeline STEM (science, technology, engineering and math) program with helping him academically. He said he was involved with the program as a freshman and a sophomore, which would allow students to do homework or tutor other students in the first hour of the school day and then do a special activity like forensics or anatomy in the second hour.

Shadi has made the Warren Mott honor roll every year since his freshman year.

"Mohammed Shadi is an outstanding student, both academically and socially," Warren Mott Principal David Meengs said. "He's excelled in many facets of academics. Mohammed is a wonderful reflection on the Warren Mott High School community, and we are proud to say he is a great student of Warren Mott."

The Macomb Daily Students of the Week are selected in advance by the schools with the approval of the Macomb County Secondary Principals Association in cooperation with The Macomb Daily and the Macomb Intermediate School District.