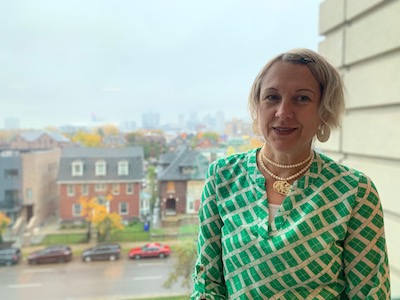 Heather Sandlin’s role as an academic services officer in the Eugene Applebaum College of Pharmacy and Health Sciences has afforded her the opportunity to shepherd students from diverse backgrounds through the challenges inherent in the college experience.

“Students face several transitions throughout their academic career, and often the most challenging is the one from high school to college,” she said. “Students entering college are not only navigating new academic territory, they are also developing new relationships and building community at the same time.”

Sandlin also serves on WSU Applebaum’s Council on Diversity and Inclusion (CODI), is a Student Disability Services (SDS) liaison and an instructor for the First Year Seminar (FYS) 1010: Learning with the Brain in Mind. Her combined experiences led to an interest in mentoring and ways to build relationships among various student populations.

Guided by those principles, Sandlin is now working to increase the sense of community among those with learning differences by launching the first Michigan chapter of Eye to Eye, a national mentoring program aimed to help those who learn differently flourish.

Eye to Eye trains college students with learning differences, including dyslexia and ADHD, to mentor similarly-identified middle school students. Sandlin is leading the effort to bring Eye to Eye to Wayne State and a partner middle school in Detroit.

“The program does so much more than boost academic success for both mentors and mentees. It grows a community of leaders that is truly inclusive,” Sandlin said. “The self-confidence students feel from that makes a big difference across all aspects of their lives.”

According to the National Center for Learning Disabilities, there are 2.4 million American public school students identified with learning disabilities. And only 68% of these students earn high school diplomas versus 91% of their peers, reports the U.S. Department of Education. Eye to Eye aims to give these students a chance to succeed, self-advocate, graduate, feel part of a community – and to have hope for their future.

When the program begins here next fall, once a week, Wayne State student mentors and middle school mentees will meet in a welcoming after-school group. These gatherings at other Eye to Eye sites throughout the country are often the first time some students feel part of a community without judgment or stigma. Mentees can literally see their own future – college – in their mentors. Over the course of the academic year, through Eye to Eye’s social-emotional curriculum, Sandlin hopes to see students’ self-doubt transformed into empowerment.

Sandlin is currently taking steps to identify WSU student chapter leaders as well as a Detroit middle school partner. Chapter leaders and mentors may be in any major from any school or college within Wayne State.

Next August, WSU chapter leaders will attend Eye to Eye’s week-long intensive training program at Brown University. Through workshops and interactions with national role models, they will develop their skills in leadership and community building, which they will use back at Wayne State to advocate for and run the program.

Sandlin is also raising funds to get the mentoring program rooted at the university. Eye to Eye has pledged $32,000 of the $40,000 needed to run the Wayne State chapter for two years; the remaining $8,000 will come from Sandlin’s fundraising efforts. After that, she hopes the chapter will be self-sustaining through sponsorship.

Sandlin has already secured the generous support of Peter Frade, WSU Applebaum’s associate dean for health sciences, who sees great value in the project for Wayne State and Detroit youth.

“I am thrilled that Heather is bringing Eye to Eye to the university,” said Frade. “This initiative directly reflects the high priority WSU Applebaum puts on diversity and inclusion. Everyone is valued here and contributes to our community, and I am looking forward to seeing Heather represent that part of our mission in Wayne State at large and in Detroit middle schools.”

Sandlin is pursuing this project as part of inaugural cohort of Wayne State University's Academic Leadership Academy (ALA), an initiative of the Office of the Provost. Each of the academy’s 26 members is tasked with developing a leadership project to improve some facet of campus life. In addition to Sandlin, five others from WSU Applebaum are part of the Academic Leadership Academy and working on their own initiatives.

Sandlin’s mentor for the Eye to Eye project is Jeffrey Kuentzel, director of CAPS. WSU Applebaum Assistant Dean for Student Affairs Mary K. Clark is her sponsor, and Associate Dean for Health Sciences Peter Frade is her executive sponsor.

To learn more about Eye to Eye at Wayne State or to get involved, contact Heather Sandlin at hsandlin@wayne.edu or 313-577-5523.