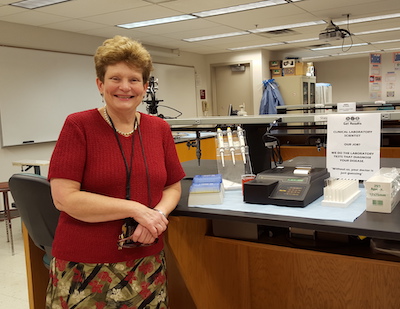 In 1980, when Janet Brown joined Wayne State University’s Medical Technology program in what was then known as the College of Pharmacy and Allied Health Professions, President Jimmy Carter was serving his final year in office, Rubik’s Cube had just hit the market and the World Health Organization announced that smallpox had been eradicated.

Forty years later, Brown will retire from her position as assistant professor in what has since become known as the Clinical Laboratory Science (CLS) program in what is now the Eugene Applebaum College of Pharmacy and Health Sciences. A lot has changed, but Brown’s commitment to teaching has held steady.

“Janet has been a dedicated faculty member throughout her tenure at Wayne State,” said CLS Program Director Karen Apolloni. “She has been a team player over the years, teaching a variety of courses, pitching in whenever and wherever she was needed. She will always be known for her dedication to improving the program and caring for her students.”

In fact, leaving her students will be the hardest part of retirement, Brown said. “The students are what’s kept me here all these years — the students and our mission to provide high-quality training and education. A lot of our students have gone on to get PhDs or other advanced degrees, but the majority of them have stayed working in the lab, and it’s always nice to see them at professional meetings.”

Brown spent a good part of her first decade at WSU in the lab with college luminary Dr. Eberhard Mammen, doing coagulation research with patients who had blood clots. She was granted tenure in 1986 and earned a Teaching Excellence Award in 1999 — well deserved, according to Associate Dean for Health Sciences Peter Frade, who added, “I have profound respect for Jan’s teaching abilities.”

Frade said that Brown was the first faculty member he met when he joined the college in 1996: “We immediately hit it off and worked to develop of one of the courses in the Forensic Investigation program. She is an astute, keen observer and an outstanding teacher.”

For two cycles, Brown served as CLS program director under Frade, and was a member of many college committees, including those for curriculum, salary and various search committees. In addition, the tenured assistant professor was active in the American Society for Clinical Laboratory Science-Michigan (ASCLS-MI) and served a term as president.

Beyond supporting students in the classroom and lab, Brown supports them financially as a donor to the Christine Ford Annual Scholarship in Clinical Laboratory Science. A first-generation student herself, Brown said she feels strongly about helping students who are putting themselves through school.

To that end, she also volunteered with Wayne State’s GO-GIRL program that encouraged middle schoolers to pursue STEM careers, and intends to continue volunteering in retirement. “I joined a church that’s quite active in social justice and environmental issues, and I’d like to volunteer at an animal shelter if I can figure out how to do so without bringing all of them home,” she said, adding that her rescue mutt Molly provides plenty of furry companionship. Add to all of that the prospect of a lot more time to putter in the garden and Brown says she’s looking forward to the next phase of her life.

Of course, her gain is Wayne State’s loss. “I truly admire Jan’s abilities in teaching and formatting classes — she went above and beyond,” Frade said. “She is an expert in clinical hematology. We and the students were very lucky to have her for so many years.”