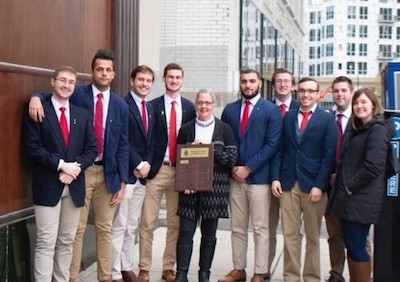 The Mu Omicron Pi chapter of Kappa Psi honored Professor of Pharmacy Practice Mary Beth O'Connell by naming its Sweetheart Award after her. The Sweetheart of Kappa Psi Award was revived in 2017 to honor a select woman’s devotion to the brotherhood, both professionally and through their support of the brothers. Kappa Psi brings together men in pharmacy for fellowship, leadership and service.

The Mary Beth O’Connell Sweetheart of Kappa Psi Award will be voted on and presented annually to a woman who has no duty nor demand by the fraternity, but who willingly chooses to help the brothers of Kappa Psi develop into the sort of men who will lead pharmacy forward.

“There is no one else who embodies those qualities nor consistently supports us more than Dr. O’Connell,” said fourth-year student pharmacist and Kappa Psi brother Zach Mueller. “She is a true inspiration to what it means to be a graduate of a Greek organization and the continued commitment she gives serves to set a high standard for generations of graduates to come."

Alumnus Dave LaForest ’17 said that O’Connell has always treated the men of the Kappa Psi – Mu Omicron Pi Chapter with honor and respect, and supported their events and fundraisers. Like many of the brothers, he said she also made a tremendous impact on him directly and, in turn, on his patients.

“Her Patient Perspective course left an impact on how I approach patients of different cultures and language barriers, so much so that I was recognized by my pharmacy leadership for going above and beyond for a patient who could not write or read English well,” he said.

Kappa Psi – Mu Omicron Pi Chapter President Hussein Safaoui (P2) presented O’Connell with the award at a chapter brunch in November, relating that they chose to name the award after her so she would always be remembered as part of Kappa Psi.

The brothers collectively expressed these sentiments:

“Dr. O’Connell has built a legacy within our fraternity to the point that, if anyone is asked, there is a story to tell. Not only does she aid in our social development through general conversations, engagement during events and her willingness to entertain our charming behavior; she goes above and beyond to support our professional development. Dr. O’Connell has become a great resource by putting brothers in contact with various pharmacists in the field. In light of detail, Dr. O’Connell has been someone who continuously offers out a hand to all of the brothers of Kappa Psi, whether it’s a friendly conversation, career advice or general life advice. These actions are indicative of a true Sweetheart of Kappa Psi.”

O’Connell’s involvement with Kappa Psi began while she was a student pharmacist at Wayne State and a member of Lambda Kappa Sigma, the fraternity for women in pharmacy. She graduated with a B.S. in Pharmacy in 1979 and went on to earn her Doctor of Pharmacy degree from the University of Minnesota. She returned to Wayne State as a faculty member in 2002.

“An award from students is priceless and very meaningful. I try to help all students achieve their dreams, enhance their abilities, and help them during times of stress and tragedy. You never know if you make an impact on students, but this award means I must have done something good for these fine gentlemen and future pharmacists. I'm still glowing from the honor.”