Dominick Astorino is improving safety of death care in Kenya 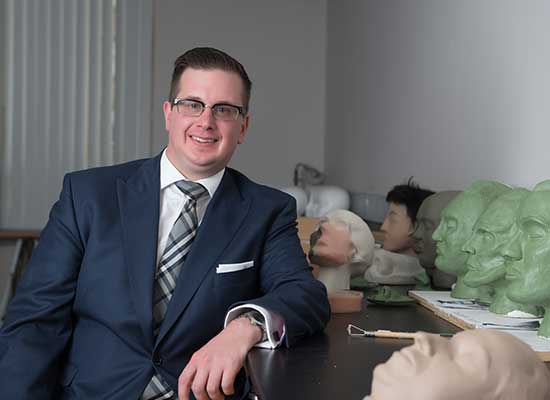 Malaria. Cholera. Yellow Fever. Ebola. Typhoid. Such pandemic and epidemic diseases run rampant in Kenya, but they don’t die when the body does. When not properly handled, the dead can spread these and other health issues to the living – and are doing so in exponentially growing numbers, especially death care workers in close contact with the bodies.

“Kenya’s challenges of extreme weather, malnutrition, acts of violence, insects and animal attacks, in addition to standard deaths from age and sickness, really skyrocket the death rate there. When you couple that with a lack of electricity, no running water, and impoverished families that can’t pay for proper funeral services, it is a recipe for disaster,” explained Dominick Astorino ’03, a mortuary science faculty member at Wayne State University, and a licensed funeral director and embalmer.

Kenyan families who can’t afford a burial right away must leave their loved one’s body in the mortuary until they can – a time that, for many, never comes. Bodies are stacked, uncooled and barely sheltered from the region’s tropical heat and humidity, with disastrous results.

In addition to the issues with basic sanitation, impoverished citizens face psychological trauma as well.

“There is an emotional aspect to viewing the dead that is instrumental to community and society,” Astorino said. “Seeing a deceased loved one at peace is a way of processing the transition and gives families a chance to say goodbye. This is critical to healthy bereavement and grief.”

While funeral customs vary across the globe, Kenyans have a strong desire to see and memorialize their dead, but mortuary conditions are so poor that families, not to mention workers themselves, are getting physically sick and facing lasting emotional shock when in viewing the deceased. By contrast, embalming slows the process of decomposition until desired funeral customs can be performed.

But a mere 302 mortuaries serve Kenya’s population of roughly 50 million, whose average life expectancy is just 54 years. In a country where land space is limited even for the living, most graves are unmarked and unrecorded.

A vast percentage of mortuary workers are criminals who have been sentenced to work there, compounding the issue.

“These are not trained professionals. They are not invested in doing things safely or ethically. Working in a mortuary is quite literally a punishment dealt via Kenya’s criminal justice system to the worst offenders because it is so dangerous,” Astorino said, “It is almost a death sentence in and of itself.”

Against all odds, there are funeral professionals in Kenya working by choice – and working to fix this broken system. Two years ago, Ezra Olack, president of the Funeral Service Association of Kenya (FUSAK), a roughly 250-member organization that has been fighting to legitimize the profession, contacted Astorino for help. And he answered the call, developing a strategic plan, the Kenyan Embalming Education Initiative, to spark a revolution in death care there.

To bring his plan to fruition, Astorino raised more than $18,000 to outfit the country’s busiest mortuary up to modern standards, train staff to use the new equipment and safe practices, and put in place a framework for these trainees to fan out the knowledge to other Kenyan mortuaries.

Initially, FUSAK did their own fundraiser for the project, but only came up with about $300. A mortuary worker’s salary in Kenya is $70 a month. But Astorino’s initiative caught the attention of the Undertaking podcast, which launched a pro-bono Fund the Funeral crowdsharing campaign in the U.S. and then spread the word to its wide audience through an interview on an episode as well as via their social media channels.

Funding poured in from donors big and small. A collection of individual donors made a big difference in the total, and larger companies such as Pierce Chemical came through with both money and supplies. Pierce is donating and shipping vital personal protection equipment (PPE) to the model lab. Another donor, funeral director and engineer/inventor Joseph Bernaudo, is hand-crafting embalming instruments that will run off batteries because of Kenya’s varied voltage and unstable power grid.

Getting supplies to the African country is a challenge in and of itself. Formaldehyde – classified as a hazardous chemical but the lynchpin of embalming – can’t travel by air; it must go by sea.

With two years of painful and pricey inoculations building his immunity, Astorino will make the 25-hour flight to Kenya this spring and spend nine days setting up the mortuary and educating its workers on sanitary and embalming techniques through hands-on demonstrations, including the proper PPE use and handling of contagions. He aims to establish a standard of care in embalming and the handling of remains as well as a rudimentary licensing process for embalmers.

In the long term, Astorino hopes that his efforts will help legitimize the funeral service profession with the Kenyan government, which ultimately could lead to support and regulations. Currently there are none. During his trip he will visit with representatives from Kenya’s Parliament to talk about the benefits of embalming on community health.

He aims to measure the impact of his efforts by measuring and comparing the instances of mortuary worker illness and death before and two years after the trip.

Astorino remembers being drawn to the funeral service profession at the age of six, when his mother faced the passing of a cousin from ovarian cancer. He was fascinated by the ritual, from the casket to the calming stoicism of the suited funeral directors.

“Right then, I knew I wanted to do that, to be those guys, and I never changed my mind,” Astorino said. He started working in a funeral home at 16. “Yes, that made me the biggest nerd in the world, and today I embrace that completely,” he said.

After receiving a B.S. in cellular biology, he went on to earn a degree in mortuary science from Wayne State in 2003.

In addition to serving as the managing director at Wujek-Calcaterra & Sons in suburban Detroit, Astorino shares his passion and expertise with students in Wayne State’s mortuary science program, where he has overseen the restorative art courses for the past five years.

“I believe in what I do as a funeral professional, and that is why I teach,” he said. “I want students to know that they can make a difference for families and – as in the case of my work in Kenya – for an entire society and culture.”

Astorino is a recipient of the university's Excellence in Teaching Award and sits on the restorative art curriculum review committee for the American Board of Funeral Service Education. His work in the field of restorative art and reconstructive embalming has been highlighted by numerous publications as well as invitations to speak across the United States, Canada, Europe, Africa, Asia and the Caribbean. He is a member of the Michigan Funeral Directors Association, the National Funeral Directors Association, the British Institute of Embalmers and the Academy of Professional Funeral Service Practice.

Since 1939, the Wayne State University mortuary science program has been dedicated to educating and developing funeral service professionals who uphold the values of service, ethics and professionalism in serving their communities with care and distinction. Our accredited bachelor's degree program is now available online to students nationwide at WSU's affordable in-state tuition rate, meeting the educational requirements for licensure in every state.

The public is invited to explore Wayne State’s mortuary science labs and facilities, as well as meet faculty members including Astorino, at the program’s annual open house, scheduled for Thursday, Nov. 7, from 5 to 8 p.m. at 5439 Woodward Avenue in Detroit.